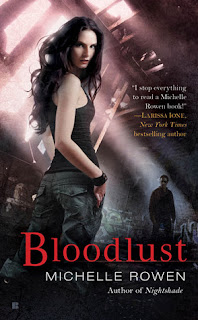 Jillian Conrad’s blood has killed the vampire king. Now an enemy to all vampires, she is targeted for elimination. So is the infant daughter of the dead king. If Jillian doesn’t stand in the way of her death, then everyone, living or dead, is in great peril.


When I first started this series, I got the feeling of it being more of an urban fantasy than a paranormal romance.  While there was definitely some sexy scenes in the first book, it was still edgy enough to be a darker read.  So when Bloodlust released, I was excited to jump back into the world of dark and suspense with Jillian and Declan.


What I loved the most was the turmoil between Jillian and Declan.  While they are both attracted to each other, they each have their reasons for staying at a safe distance as well.  They do the mating dance of should I or shouldn’t I, but they also have some steamy scenes of caving into the lust between the two.  I admit that I was actually looking forward to Declan and Jillian coming together and figuring out a way to make it work.  I was also anxious to see how they were going to deal with the fallout from killing the Vampire King.  I loved the twists and the surprises the author brings to this book.  While I wasn’t a big fan of the former Vampire King until the end of the first book, the introduction of his brother brings evil to a whole new level.


If you looking for a more edgy and dark feel to your paranormal romance books without falling into the deep end of urban fantasy, then the Nightshade series should give you enough enjoyment of both worlds to satisfy you as a reader.