With all of the talk lately of bullies within our school systems, I thought I had dodged a bullet so far with my children.  My oldest was never really bullied and surprisingly, my middle daughter who is mentally disabled has never been bullied either.  It could be because most people in town know not to mess with my children because I am one hot headed mama bear when it comes to my kids.  I have always told my kids that they would not receive any punishment from me for defending themselves against bullies.  If those kids are tough enough to try and hit my children, then by God they better be tough enough to take a beat down from my girls when they are being hit on.

Unfortunately, my SIX YEAR OLD DAUGHTER has not had the same experience as her sisters.  At the beginning of this year a boy had to be moved away from her desk in first grade because he was constantly picking on her and fighting with her.  The teacher moved him to the “trouble maker” corner.  Then today, I get a call from her school saying that this boy hit her and it left a small red mark on her cheek.  I told them that my husband and I would be there in just a moment.  When we arrived, they went and got my daughter from class and imagine my shock when my daughter has a black eye.  NOT a small mark on her cheek.  We. Were. PISSED!

I had to keep bite my freaking tongue because other children were around.  My daughter said that this boy was fighting with another little boy and she got hurt when he fell back.  Did the boy apologize? Hell no.  Did he say it was an accident? Hell no.  He laughed according to my daughter.  Did he get suspended? Hell no.  Did he get in any type of trouble for this? Hell. Freaking. No!

Now, the picture is a little blurry and she has had ice on her face for a bit now.  It is swollen more than what the picture is showing, and the bruising is just now starting to really show.  I know by morning it will be even worse. 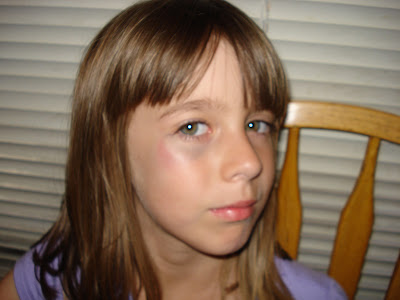 Want to know something else? School photos are next week. We will be retaking those.  I am just glad my daughter doesn’t have any real damage to the eye itself.  At school, she told me her head hurt but she wanted to stay at school and finish her report card tests.  Now that is courage.  She didn’t care what people thought and she just wanted to finish her work.

The next time you hear about bullies at school and think your children are safe, think again.  They are starting younger and younger with schools turning the other cheek.  This Mama and Papa Bear have already decided if my daughter so much as gets one more scratch from this boy, I will be pressing charges against their parents for not doing something.  I will also go on the news sharing how the schools are not doing anything.