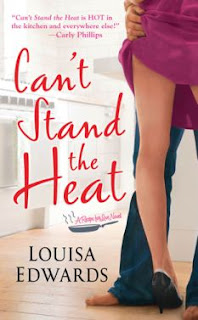 CAN’T STAND THE HEAT
Author: Louisa Edwards
Source: Library
SYNOPSIS:
For sharp-tongued food critic Miranda Wake, the chance to spend a month in Adam Temple’s kitchen to write an exposé is a journalistic dream come true. Surely Miranda can find a way to cut the hotshot chef down to size once she learns what really goes on at his trendy Manhattan restaurant. But she never expected Adam to find out her most embarrassing secret: she has no idea how to cook.

Adam’s not about to have his reputation burned by a critic who doesn’t even know the difference between poaching and paring.  He’ll just have to give the tempting redhead a few private lessons of his own—teaching her what it means to cook with passion…and doing more with his hands than simply preparing sumptuous food.

The cover caught my eye when reading about this book on another blog.  I was excited to find another romance that features cooking as well.  So I sat down to read this book  by Louisa Edwards, waiting for my mouth to water at all the romance and antics in a kitchen.  Well, I am still waiting.

The book started out great.  We have Miranda, who is an independent woman who speaks her mind, and we have Adam, a strong yet cocky mouthed cook.  I thought their was going to be a spicy romance brewing in the pages.  For some reason though, I just couldn’t bring myself to care about the characters.  To me, they just didn’t seem to click.  For the first half of the book there was barely any dialogue between the two.  When they did talk, it was boring.  I did like Jess and Frankie though.  Frankie was hilarious and Jess was a great secondary character for the book.  The book was slow moving and just couldn’t quite take off for me.

Overall, a book I would recommend checking out from the library instead of spending your money on first.  If you end up liking it, buy it afterwards.  I would still give this author another chance and read the second book in the series though, just so I can see if the writing and story can become better.

One Response to “CAN’T STAND THE HEAT by Louisa Edwards”