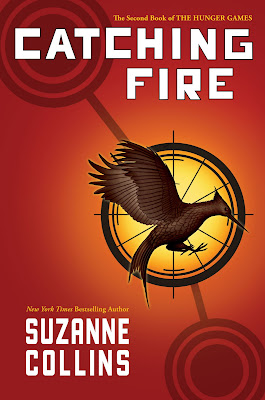 Katniss Everdeen and Peeta Mellark won the annual competition described in Hunger Games, but the aftermath leaves these victors with no sense of triumph. Instead, they have become the poster boys for a rebellion that they never planned to lead. That new, unwanted status puts them in the bull’s-eye for merciless revenge by The Capitol. Catching Fire maintains the adrenaline rush of Suzanne Collins’s series launch.

Sometimes when I find a series that I am enjoying so immensely, the follow up books to the first one don’t seem to measure up with the wow factor.  When I finished The hunger Games, the first book in the series, the games were over and I didn’t know what the author was going to be able to do to keep the momentum going for the next book.  All I can say is WOW!  She brought back the suspense, intrigue, drama and romance so hard that I didn’t think it were even possible.


When Peeta and Katniss arrive back to District 12 after winning the Hunger Games, they didn’t know what to expect.  They thought they were done being included in the Capitol’s court of jesters called The Hunger Games.  They knew there would be some backlash after what they did in the arena, but they never expected what the officials end up doing to them in Catching Fire.


I literally was on the edge of my seat, hands gripping the pages, the whole time reading this book.  I will even go as far to say that this book surpasses the first book in so many ways!  I enjoyed it even more than the first book and I didn’t think that was even possible.  When I read about Peeta I think of bread and wedding cakes with love.  When I think of Katniss I imagine birds in flight struggling to survive.  With Gale, I imagine the rock in the family with emotions bottled up.  With Haymitch, I was still unsure of his motives, so he had me going in all sorts of directions! Then enter Finnick with his good looks, humor and sugar cubes!  I will never look at a sugar cube the same way again!


I finished this book within a matter of hours and yes, my house and family suffered for it.  They fended for themselves in the kitchen, clothes were having to be dug out of bottom of drawers since laundry ceased to be cleaned, and they even had to break down and do the dishes themselves just so I could keep reading this outstanding book. If you haven’t started this series yet, you are truly missing out on amazing writing and an emotional roller coaster!  Go out, pick them up, and read them!