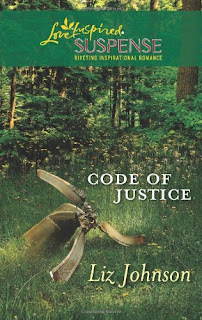 CODE OF JUSTICE
Author: Liz Johnson
Source: Author Submission
*I received this book free of charge
in exchange for an honest review*

“Follow the drugs.”
Her sister’s last words shake FBI agent Heather Sloan to the core. They also convince her that the helicopter crash only Heather survived wasn’t an accident. Sheriff’s deputy Jeremy Latham is assigned the case—he’s the one who can help Heather find the person responsible…once she convinces him they should work together. As they dig for the truth, they learn to trust and care for each other. Will they lose it all when the killer targets Heather? She’s willing to risk her life to find her sister’s killer—but her code of justice could cost her the chance to win Jeremy’s love.

After participating in a previous blog tour for this author, I was excited when she asked me to join this one as well!  When it comes to Inspirational Romance I can be a little hesitant on accepting the book for review.  Since I read the previous book by the author, I knew that she had the ability to pull it off without coming across as “preachy” that some books in this genre can be like.

When Heather loses her sister in a plane crash that they were both involved in, she can’t get her sisters final words out of her head — “Follow The Drugs.”  While she is recuperating from her serious injuries in the hospital, she finds herself the victim of a killers cover-up.  This is where we meet Sheriff’s Deputy Jeremy Latham.  He arrives at the hospital to follow up on some questioning into the helicopter crash when he hears her screams from the hospital room.  The attacker gets away, but Jeremy finds himself involved in an undercover cover-up that Heather has also fallen into unknowingly. Together they try to figure out who is behind the helicopter crash and was determined to silence Heather to the point of murder.

I really enjoyed this book from beginning to end.  Jeremy was a great hero and I loved his sense of humor.  Heather was strong willed and independent which Jeremy found out a few times on his own with humorous results.  At first I didn’t know who the killer was, but then as you started adding up the puzzle pieces you can easily figure it out.  Even though you figure out who the killer is on your own deductions, the author still did a wonderful job of keeping you interested in the story to keep you reading until the end.  I just had to know the whole story and wanted to know why this person would do it.

The only problem I had with this book was that it seemed a lot of the chapters ended the same.  It was always with Heather or Jeremy saying a little prayer that the other was all right.  Those chapter endings were the only thing that annoyed me at times because it reminds you that you are reading an Inspirational Suspense book.  There are a few scenes in the book where each of them try to tell the other certain parts of the Bible, but it is done in a way that didn’t come across as forced on the reader.  They were more like little hints and fit with the story when it needed it.

I also liked that fact that several of the characters in the book were from her previous book titled Vanishing Act.  It was a delight to see how the other characters were doing after their story had ended.

If you don’t mind the book being from the Harlequin line of Inspirational Suspense, and you can overlook a few prayers and scriptures through out the story, then this would be a great book to read.  It has suspense, romance that isn’t over the top, humor and mystery to keep you interested until the end.