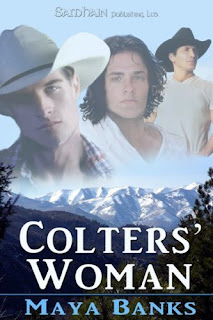 Adam, Ethan and Ryan aren’t looking for women. They’re looking for a woman. One woman to share their lives and their beds. They don’t want a casual romp in the hay, they want the woman who will complete them and they’re losing hope of finding her. That is, until Adam finds Holly lying in the snow just yards from their cabin. He knows she’s different the minute he holds her in his arms. But before Adam gets his hopes up, he knows he has to gauge his brothers’ reactions. Soon it’s evident that she’s the one. There are a few problems, however: convincing her she belongs with them and keeping her safe from the man who wants her dead.

After many recommendations for this book, I finally caved and got it. Wow! All those recommendations were right!  First of all, look at that cover! Who wouldn’t want to sit down and read a book about those three men?  Those eyes an all three of them are telling you to read it!

I loved each one of the characters of this book.  It’s hard to pick a favorite. Each brother has his own personality that makes you fall for them.  Adam is the serious older brother that likes to have everything planned and in order. Ethan is the laid back and smooth talking fun brother.  Ryan is the tormented and closed off brother that has been through hell with a problem with trusting people.  Holly is the naive and soft spoken woman they have been looking for.  She is on the run after watching her husband murder someone on their wedding night.  Adam finds her in the snow, barely alive, by their ranch. He brings her into the cabin and all the brothers agree that she is the one. They have been waiting for the perfect woman to love and they know they have found her.

I loved this book so much. The only problem I had was how easily Holly accepted everything with the brothers.  It was an unusual arrangement and most women would want to think about it longer than a few hours.  I am looking to forward to reading the rest of the books in this series!