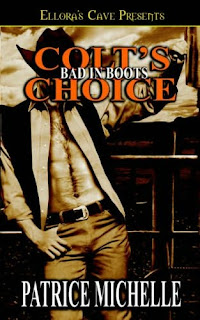 Colt is very aware the sexy part owner of his rodeo ranch is way out of his league. But the more he tells himself Elise Hamilton is ‘hands off’, the more he wants to put his hands on.

Elise knows her broad-shouldered and lean-hipped cowboy partner has all the makings of Mr. Right. First, she has to convince Colt she’s serious about helping him run the ranch without her libido getting in the way.

Then again, maybe she can rope her cowboy and have him, too.

This is the second book in the Bad In Boots series by Patrice Michelle.  I hadn’t even heard of this series or author before until I came across this book at a used book store.  The summary sounded fun and thought this would make a quick read to pass some time at night.  Needless to say, my night went without sleep and I fantasized about cowboys more than I should have.

I know it is hard to read about the highly coveted cowboy that sweeps you off your feet.  The author did make her cowboys to be better than what you would expect in a romance.  The character of Colt actually could be a male you could find on a ranch and instantly have drool running down your chin from his sexy good looks.  I liked Colt, but there was one thing about him that made me cringe just a little.  I didn’t like how possessive he became with Elise.  It was constantly Mine,Mine,Mine out of his mouth whenever someone made a play for her.  I can understand the possessiveness if say they were engaged or in an actual relationship, but Colt made no mention at first of them seeing each other exclusively.

Elise was smart and sexy in her own right.  She could turn on the sex hormones just as quickly as the cowboys.  Yet, underneath all the sexy, she also had a brain and knack at business and computers.  I liked her input in handling the ranch.  I also liked how she wasn’t afraid of a little hard work around the ranch.  She kept up with the ranch hands and earned their respect.

I loved the side characters of Mace and Cade who just happen to be Colt’s sexy and single brothers. They each brought a certain personality to the book that made them enjoyable to read about. I do hope the author plans to continue their stories in future books.

I am happy to have found a new author to read that has a way with writing believable cowboys who happen to be sexy!  Now I must go and purchase the rest of  her books along with the first book in the series.  Don’t worry if you haven’t read the first book though.  This book did wonderfully as a stand alone book.