Today on My Overstuffed Bookshelf, I have the very talented Kerrelyn Sparks!!
Lets give her a warm welcome and stay tuned after reading her Guest Post for an amazing giveaway hosted by AVON books!

A Different Sort of Hero
By Kerrelyn Sparks
Not every romance hero can be born a duke…or a werewolf.  That was the idea behind the hero of The Forbidden Lady.  Can a normal guy succeed as a hero without the benefit of a title– or in the case of my usual supernatural heroes, without the benefit of superpowers or fangs?
Introducing Quincy Stanton, the hero of The Forbidden Lady.  He’s a sea captain from in 1769, a tense time in American history that climaxes with the Boston Massacre.  is recruited by the Sons of Liberty to spy on the British. Instead of shifting into a werewolf, he transforms into the James Bond of the American Revolution.  With no superpowers, he depends on some super gadgets—a carriage rigged with special compartments and a booby trap, a magnifying glass lined with phosphorescence so it glows in the dark, and a submersible for sneaking about harbor. (This is based on the Turtle, an actual submersible used during the Revolutionary War).
So is a different sort of hero—or is he?  Like all my heroes, possesses what I consider heroic virtues:  honor, strength, intelligence, and integrity.  He also has something else in common with my supernatural heroes—a second identity he needs to keep secret.  He can’t admit to being a spy.  It would cost him his life.  So when he falls in love, how can he gain the heroine’s trust without revealing his secret?
It’s the same dilemma that some of my vampire and shifter heroes face.  In Wild About You, (releasing November 27th), Howard Barr is trying to win the heart of Elsa.  Would any woman in her right mind want to fall in love with a guy who occasionally becomes a real bear?  A huge, grizzly bear to be precise.
Whether it’s a sea captain hiding the fact that he’s a spy, or a guy who played for the Chicago Bears hiding the fact that he’s a were-bear, it’s still a hero with a dual personality. He’s both the prince and the beast, and it will take a special heroine (or Beauty) to see past the beast and recognize the prince.  In The Forbidden Lady, becomes a very different sort of beast—an obnoxious dandy in lavender silk and a lavender-tinted wig.  Only another spy, the lovely Virginia Munro, will manage to see through his Scarlet Pimpernel-like masquerade.  And along the way, there will be a lot of laughs, some adventure and suspense, and of course, some glorious romance.
The Forbidden Lady goes on sale in e-book form September 25th, then in print form October 25th. Originally published as For Love or Country, it has now been revised to be funnier and sexier than ever.  Wild About You, the thirteenth book in the Love at Stake series, releases November 27th.  For more information, please visit www.kerrelynsparks.com.
******************************************************
ABOUT THE AUTHOR 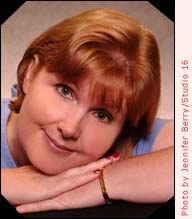 Kerrelyn Sparks’ first paranormal romance, How to Marry a Millionaire Vampire, zoomed out of the bat cave so fast it became Borders bestselling debut romance of 2005.   Each book in the Love at Stake series has become a USAToday bestseller.  When the fourth book, The Undead Next Door, landed on the New York Times bestseller list, even the Undead sat up and took notice, which made Kerrelyn a bit nervous. She lives in the Greater Houston area with her husband, children, and a house full of garlic.  So far, there are no vampires in her family. Werewolves are another matter entirely.
****************************************************** 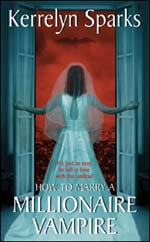 CONTEST
Thanks to AVON/HarperCollins, I have:
5 copies of How To Marry A Millionaire Vampire (US ONLY)
1 $25 gift card to the e-retailer of winners choice (INTERNATIONAL)
RULES
— Comment for your chance to win!
— Please state if you are US or International so I know which contest to enter you in.
— Leave an email address for me to contact you if you win!
— Contest ends 9/30/2012
GOOD LUCK!