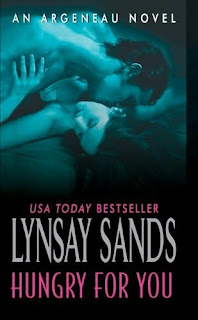 I had the extreme pleasure of talking to Lynsay and she agreed to get in touch with Justin Bricker, who just happens to be my favorite Immortal of the series!  Well, guess who stopped by My Overstuffed Bookshelf to answer some questions for us?
Yep, Bricker sat down with me for a lovely chat and even told me that author Lynsay Sands has agreed to give away ONE SIGNED copy of her latest book, Hungry For You!  You don’t even know how jealous I am right now of the winner who will receive this book!  It is a dream of mine to meet Lynsay Sands and having a signed copy of one of her books would probably send me into cardiac arrest!  So stay tuned for the giveaway after I share with you the lovely and sexy interview that Bricker and I had!
INTERVIEW WITH JUSTIN BRICKER:
1. How does it feel being one of the younger Enforcers of the bunch?
Well, I keep the ‘old timers’ on their toes. If it wasn’t for me, they wouldn’t know a thing about stuff like social niceties, microwaves or even how to get to know a woman without creeping her out or scaring her senseless. They can be pretty clueless.
2. Is Lucien really as strict and mean as we all seem to think? Is he really a softy at heart?
Lucian’s a great guy He’s a good friend and cool under fire. He may be strict and seem hard at times, but as enforcers we all have to be that way occasionally. Lucian, though, carries more responsibility than the rest of us, and has forever, so some of that has become more ingrained in him. As for a softy at heart…well, he does have a soft spot when it comes to his family, but…I wouldn’t suggest making the mistake of thinking he’s a softy.
3. I see Lucien is getting ready to welcome a new baby to the fold.  Does it make you think about what your future may bring?
Uh… NO. LOL. I mean, sure, it would be nice to have a life mate some day, but I’m far too young to think about that yet. There are too many lovely ladies out there in need of attention from a guy like me. Life is good. No, I’ll worry about that whole life mate stuff when I’m older…like two hundred or something.
4.  Truthfully now Bricker, how many times have you slipped the others bags of those special blood drinks?  You seem like the one who would spike their blood bags with the alcohol so to speak.
Who? Me? Never! Or, at least, if I have, I’ll never tell. LOL.
5.  After watching so many of your friends find life mates recently, are you getting anxious to find that special someone for yourself?
Like I said, I hope to meet my life mate some day, but I’m not rushing it. Well, you know, maybe some days I wonder what it would be like to have that special someone. But, mostly, I’m perfectly comfortable in my single status at the moment… thanks.
6.  Sometimes I have premonitions and I see your life mate being named Amy? Could you see yourself with an Amy?
Whatever are you suggesting, Amy?
7.  You know I have been hinting to Lynsay about you meeting me. I could be your life mate you know.  Maybe you ought to whisper in her ear for me.
It might be more fun to whisper in yours. Lynsay’s kind of a workaholic. No fun at all, and she never listens to anyone when it comes to things like that. Kind of a stick in the mud, too. But, never fear, I’m sure Morty and the Muppets will eventually go on tour and make it out to your neck of the woods soon.
8.  Any news on what is to come with your next assignment? ( And I do mean the Enforcer job, not the band gigs you use for a cover)
You know about that, huh? LOL. Ok… Morty and the Muppets is a cover but you have to admit, it’s a good one. As for my next assignment, Lucian doesn’t tell us anything until we’re packing to go. After this, I’m heading back to the enforcer house. Lucian’s nephew, Cale, is in town and supposed to be headed there. He’s European. French, I guess. Haven’t met him yet. Not sure why he’s coming either, which has us all curious. He’s not an enforcer, and the scuttlebutt is Marguerite has something to do with it. If so…well, things could get interesting.
9.  Besides you and I, who do you think Marguerite will try to pair up next?
We single guys are dropping like flies these days, aren’t we? Thats okay though, leaves more women for me… Now, hmmm….Well I hope for Mortimer’s sake that the next match will involve Alex, Sam’s sister, as Sam won’t allow herself to be turned until she finds her sister a life mate. And then there’s Christian, Marguerite’s son, who’s just ripe for the picking…. To be perfectly honest, I hope no more enforcers get leg-shackled for a while. We’re stretched pretty thin as it is right now with Decker, Mortimer, Eshe and Lucian being so distracted. This life mate business really does make them… erm… well… stupid actually and when you’re on the job that puts everyone at risk.
10.  Thank you Bricker for joining me today! I hope I get to meet you soon!
My pleasure, Amy. Why don’t you give me your number and if I’m in the area….
GIVEAWAY: 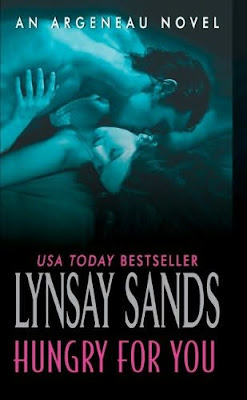 This vampire has been alone for far too long . . .
As one of the most ancient in the Argeneau clan, Cale Valens has given up on finding a life mate. His friends and family, however, have not. In fact, they believe they’ve finally found his perfect match. Getting them together, however, requires one little white lie . . .
Alexandra Willan is in a panic. Her restaurant is due to open in two weeks, but her chef just walked out. Then a highly recommended replacement arrives, an impossibly handsome culinary genius who sends electric tingles racing through her body . . .
Except he can’t cook. In fact, Cale hasn’t eaten real food in two thousand years. Yet he’s determined to prove to Alex his prowess in the kitchen . . . and elsewhere. Because never has he hungered so for any mortal woman. And not just for a taste of her, but for the whole delicious feast!

Thanks to author Lynsay Sands, I have ONE SIGNED COPY of Hungry For You to giveaway!
RULES:
1. Contest is open to USA and Canada.
2.  Just leave a comment with an email address for contact purposes in case you are chosen as the winner.
3.  No need to be a follower, but I would love it if you would join my site!
4.  Contest will end on Dec. 5th, 2010 with the winner being chosen and announced on Dec. 6th, 2010.
ENTRY:
JUST ANSWER THIS QUESTION:
Have you ever read any books by Lynsay Sands?  If so, which book and character was you favorite?