Thanks to Gena and Escape Between The Pages for the heads up on the new cover!
Gena Showalter revealed  the cover to Ecstasy In Darkness, the 6th book in the Alien Huntress series, on her blog. It is scheduled for release October 26, 2010. 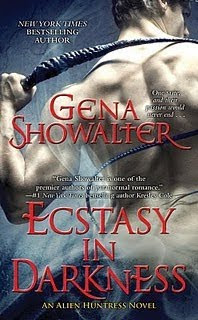 One taste and their passion would never end.

Growing up poor on New Chicago’s meanest streets, Ava Sans had two options: be the predator, or be the prey. No contest. Now, working for Alien Investigation and Removal, she’s been ordered to capture the biggest, baddest warrior of all—a vampire too beautiful to be real, with the ability to manipulate time. Once the leader of the entire vampire army, McKell has been deemed savage and unstable, spurned even by his own kind.

To McKell, humans should be nothing more than sustenance. Yet the petite, golden-skinned Ava is a fascinating contradiction— vicious yet witty, strong yet vulnerable, lethal but fiercely loyal. Against his better judgment, McKell craves that loyalty, and much more. When the chase leads to seduction, McKell and Ava will race to discover the truth about his past. But the answers will come at a price, even for a woman who thought she had nothing left to lose. . .

One Response to “COVER ALERT: "Ecstasy in Darkness " by Gena Showalter”