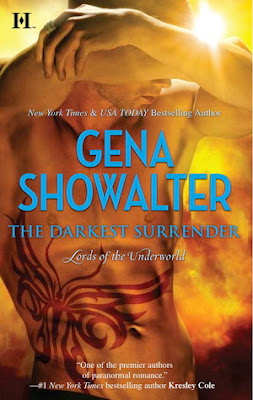 Possessed by the demon of Defeat, Strider cannot lose a challenge without suffering unimaginable pain.  For him, nothing stands in the way of victory.  Until Kaia, an enchanting Harpy, tempts him to the razor’s edge of surrender.

Known among her people as The Disappointment, Kaia must bring home the gold in the Harpy Games or die.  Strider is a distraction she can’t afford because he as an agenda of his own – steal first prize, an ancient godly artifact, before the winner can be named.  But as the competition heats up, only one prize will matter – the love neither had thought possible…

Holy Crap!!!!  Look at that sexy model and those abs! I literally had to pick my jaw up and wipe the drool! As always, the cover features that awesome tattoo that the Lords are famous for.  I can’t wait to read about Strider!  These books just do not come out fast enough for my LOTU addiction!  Come on October!!!!!