It is my great pleasure to be able to show off the new cover and book two in the Madly series by M. Leighton!!  Not only do I get to reveal the new cover and the info for the book,  but I also get to offer a contest!! YAY! 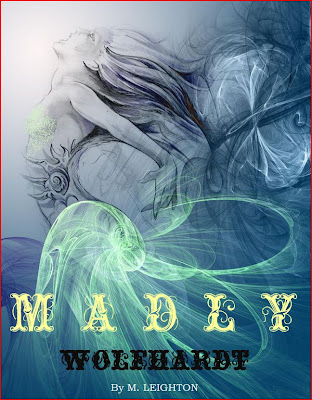 **INCLUDES BOOK 1 & 2 OF THE MADLY SERIES**
Madly is your average nearly-eighteen year old girl—for a mermaid princess, that is.
Madly James is thoroughly enjoying her internship in Slumber when the unthinkable happens—there’s a prison break in Atlas, Madly’s home beneath the sea.   A traitor has set free eight Lore, the spirits of what humans know as fairy tales, and they are making their way to Slumber to awaken their descendants.
The first spirit to arrive is that of Ulrich Wolfhardt, a man that was once obsessed with wolves and a young maiden he would follow through the woods.  After a bite from a wolf, Wolfhardt’s obsession with the girl became an unnatural hunger and the young maiden’s grandmother cursed him with a fate worse than death.  And now he’s back…with a vengeance and a bite that can infect others as well.
Madly must learn the identity of Wolfhardt’s descendant and stop him before he kills again and spreads his curse across the earth.  But the only person strong enough to help Madly is Jackson, the Sentinel who vowed to protect her and the one person capable of breaking her heart.  Can Madly resist forbidden love long enough to save the world from Wolfhardt?  Or will she have to sacrifice her heart and her destiny to save the ones she loves?

M. Leighton is a native of Ohio, but she relocated to the warmer climates of the South, where she can be near the water all summer and miss the snow all winter. Possessed of an overactive imagination from early in her childhood, Michelle finally found an acceptable outlet for her fantastical visions: writing fiction. Four of Michelle’s novels can now be found on Amazon, as well as several other sites. She’s currently working on sequels, though her mind continues to churn out new ideas, exciting plots and quirky characters. Pick one up and enjoy a wild ride through the twists and turns of her vivid imagination.


Thanks to the wonderful and generous M. Leighton, she is going to give away 2 ebook copies of Madly and Wolfhardt!  This contest is INTERNATIONAL! So everyone can enter!