I am super excited to share with you the cover & blurb for
the new book titled Down To You by M. Leighton.  I am drooling over the perfection of this cover. Okay, it’s the male specimen on the front that I am drooling over.  I plan to be one of the first ones buying this book on release day! 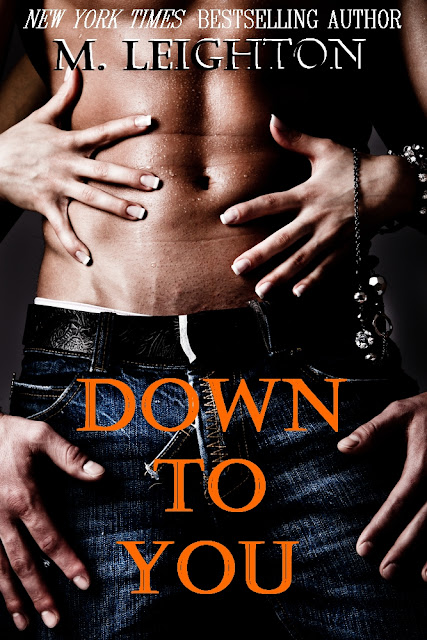 The scorching tale of one girl, two brothers and a love triangle…that’s not.

Olivia Townsend is nothing special.  She’s just a girl working her way through college so she can return home to help her father run his business.  She’s determined not to be the second woman in his life to abandon him, even if it means putting her own life on hold. To Olivia, it’s clear what she must do. Plain and simple.  Black and white.
But clear becomes complicated when she meets Cash and Nash Davenport.  They’re brothers.  Twins.
Cash is everything she’s always wanted in a guy.  He’s a dangerous, sexy bad boy who wants her in his bed at any cost.  He turns her insides to mush and, with just one kiss, makes her forget why he’s no good for her.
Nash is everything she’s ever needed in a guy.  He’s successful, responsible and intensely passionate.  But he’s taken.  Very taken, by none other than Marissa, Liv’s rich, beautiful cousin.  That doesn’t stop Olivia from melting every time he looks at her, though.  With just one touch, he makes her forget why they can never be together.
Black and white turns to shades of gray when Olivia discovers the boys are hiding something, something that should make her run as far and as fast as she can.  But it’s too late to run.  Olivia’s already involved.  And in love.  With both of them.
Both brothers make her heart tremble.  Both brothers set her body on fire.
She wants them both.
And they want her.
How will she ever choose between them?