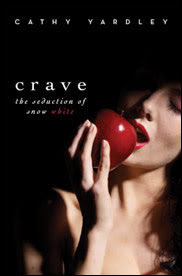 CRAVE: THE SEDUCTION OF SNOW WHITE
Author: Cathy Yardley
Source: Purchased through PBS
SYNOPSIS:
When a woman is ripe for the picking . . .
Beth Cordova’s life is no fairy tale. Having barely escaped the evil grasp of her wicked stepmother, this “missing princess” seeks refuge in a strict commune where carnal pleasures are forbidden.
Sometimes just one bite of the apple . . .
Her world is lonely and void of intimacy, until the charming Stephen Trent arrives at the commune. Suddenly Beth yearns for a man’s touch, the feel of his lips on hers . . . and Stephen is eager to show this pure-as-snow princess that she can still be the sensual woman she was once upon a time.
Is all it takes to unleash her desires…
But all is not what it seems, and the stunning beauty finds herself again in danger, her stepmother hot on her trail. The commune’s founders will not tolerate the pair, yet fleeing its walls could prove fatal. Trapped in a world where passion is outlawed, can Beth live happily ever after?
MY THOUGHTS:

Whew! This series is NOT for the faint hearted.  There was more sex scenes in this book than a man’s magazine. (Not that I would know)  Even though the scenes were hot, horny, and graphic, I could easily pick out the adaptations of the fairytale in this book.  Beth and Stephen were hot together and had the chemistry to be rooting for them from page one.
Stephen joins the commune to work undercover as a reporter.  He is instantly attracted to the Goodmaid Beth.  They quickly fall in lust and love which is forbidden in the commune.  The Founders are very protective of Beth.  Beth joined the commune when she was seventeen, escaping the deadly clutches of her evil Stepmother.  She faked her own death.  Stephen realizes who she is when he notices her birthmark.  They find themselves in danger trying to escape the commune.
Not only was this book so hot and steamy, but the author’s adaptation to it was great.  I was a little confused at times thinking is this a historical or modern day book?  As I kept reading it though, I didn’t care. It is modern day themed, but with the commune you get a feel of historical.
A great new author for me to keep looking into. Just be forwarned, that this book is hot and steamy.  If you don’t like to read erotica, then this book would not be for you.
MY RATING:

One Response to “CRAVE: THE SEDUCTION OF SNOW WHITE by Cathy Yardley”