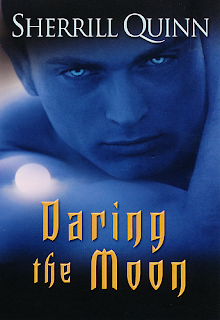 It takes a lot of ruffle Taite Gibson, investigator with the Pima County Attorney’s Office. But the enormous, snarling werewolf that’s stalking her through the streets of Tucson? Yeah, that oughta do it.


Those terrifying attacks convince Taite to seek out Ryder Merrick, a reclusive British horror writer reputed to know everything about werewolves, including how to kill them.


Turns out he also knows how to leave her shaking with desire…On his remote private island, Ryder can live safely with the beast inside him, unable to harm others or himself. Then Taite arrives, her lush, sweet scent and gorgeous curves tempting him to give in to every wicked hunger. And as a full moon rises, the only way to keep Taite safe from the evil that’s followed her here is to convince her to trust in an attraction that’s deeply dangerous, and wilder than she ever guessed…

I really tried to enjoy this book.  When the story even ventured from paranormal to just plain wacky, I kept pushing myself to finish it.  Do you know how hard it is to finish a book when it is not just clicking for you?  Well, this book took me much longer to read than normal because it was one of those books that just didn’t bring enjoyment to me.

The only character I truly enjoyed in this book was Cobb.  Yes, the butler is the one highlight of this book that made me even consider finishing it.  Taite was naive and at times lacking any strength.  She is described as being some tough woman but she was spineless enough times to  make me wonder how she even stood on her feet.  Declan was an okay character mainly because his accent brought out some funny dialogue.  He was protective of Taite in a big brother way that was nice.  Ryder was a bit rude to begin with but slowly started to warm up.  One main issue I had with this book was the instant attraction and love between Ryder and Taite.  Ryder barely meets her for a day and is already wanting her for a mate.  The bad guy was pretty easy to figure out as well.  I already knew who it was before the first half of the book had been read.

In my opinion, this could have been a better book if the author had progressed a little more in her writing.  I won’t say it is immature, but the writing is still in the infant stages of story instead of mastered.  I really think the author would be better off reworking some of the story to make it better.  Hopefully the authors writing has grown since this book and her next book I pick up will be much more pleasant to read.