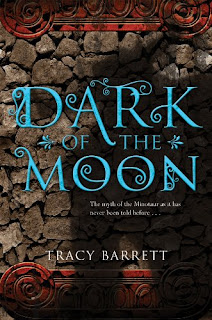 DARK OF THE MOON
Author: Tracy Barrett
Source: RAAB Associates
*I received this book free of charge in exchange for an honest review*

Ariadne is destined to become a goddess of the moon. She leads a lonely life, filled with hours of rigorous training by stern priestesses. Her former friends no longer dare to look at her, much less speak to her. All that she has left are her mother and her beloved, misshapen brother Asterion, who must be held captive below the palace for his own safety.

So when a ship arrives one spring day, bearing a tribute of slaves from Athens, Ariadne sneaks out to meet it. These newcomers don’t know the ways of Krete; perhaps they won’t be afraid of a girl who will someday be a powerful goddess. And indeed she meets Theseus, the son of the king of Athens. Ariadne finds herself drawn to the newcomer, and soon they form a friendship—one that could perhaps become something more.

Yet Theseus is doomed to die as an offering to the Minotaur, that monster beneath the palace—unless he can kill the beast first. And that “monster” is Ariadne’s brother . . .


Since I never really paid any attention in school when they were discussing Greek mythology,  I wasn’t too sure what to expect in Dark of the Moon.  It is based on the Greek myth of Theseus, Ariadne, the Minotaur and the labyrinth.  Now since none of the myth was familiar to me, I knew this would be something fresh for me to read.

I really had a hard time getting into this book.  It begins rather slowly and had an overabundance of narrative dialogue that was a little repetitive at times.  It didn’t really start getting interesting until the characters started their dialogue and started interacting.  Although the dialogue picked up the pace of the book, it still wasn’t as interesting as I was hoping it would be.  I wasn’t a fan of the characters like I should have been.  Maybe if I had known about the legendary myth at little more, it would have had me engrossed in the revelations a little more.

While the story wasn’t as great as I was expecting, the author did execute  the story with a twist nicely.  She has you thinking how tales can be twisted throughout the ages and how some things might have been different from a different point of view.  If you are a fan of Greek mythology then I would say to give this book a chance.  You might just find out more about the legend than you already know.