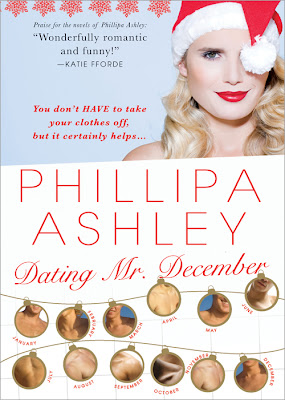 When a nice girl asks twelve men to get naked, it’s sure to cause a scandal…

Emma Tremayne leaves her high-powered PR job and moves to the Lake District looking for peace, quiet-and celibacy. So perhaps it’s not the best idea when, in the spirit of “community-mindedness,” she agrees to help the local mountain rescue team fund raise by putting together a “tasteful” nude calendar. Especially since quite a lot of the community seems to mind what she’s up to-including the tall, dark and handsome Mr. December, Will Tennant, who appears to have gotten the wrong impression about Emma’s intentions. So how does she convince him that he’s more than just the flavor of the month?

I didn’t know that this book had been previously published in the UK and even had a Lifetime movie made based on it called 12 Men of Christmas. It was a delightful surprise to find out since I enjoyed the book and had the pleasure of featuring a guest post by the author just a few days ago.

Emma Tremayne starts the story off by trying to convince the local mountain rescue team to do a fund raiser featuring the men in a nude calendar.  While most of the crew is ready to give it a go, Will Tennant does not approve of the idea.  Since he is outnumbered in the vote, he eventually agrees to go ahead for the project and is cast as Mr. December.

Emma definitely has to work hard with her PR skills in getting this calendar going. After discovering her boyfriend cheating on her, she is looking for a fresh start and she thinks this calendar is just the thing her career needs.  She doesn’t want to get involved in another relationship and especially not with Will.  He also doesn’t want a relationship, but neither can fight the attraction between the two.

If you are in the mood for a fun and sexy Christmas read, then this is the book for you.  The only thing that didn’t appeal to me was some of the wording.  Granted, this book is based in the UK, so the dialogue is a little different than what I am use to.  After I got over that hurdle though, the book was a pure enjoyment!  I loved Will and Emma.  My only hope is that the author will give each man a story of their own in future books!