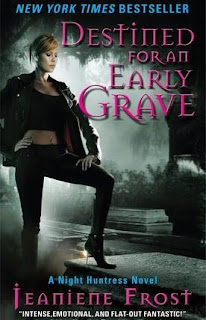 Her deadly dreams leave her in grave danger…

Since half-vampire Cat Crawfield and her undead lover Bones met six years ago, they’ve fought against the rogue undead, battled a vengeful Master vampire, and pledged their devotion with a blood bond. Now it’s time for a vacation. But their hopes for a perfect Paris holiday are dashed when Cat awakes one night in terror. She’s having visions of a vampire named Gregor who’s more powerful than Bones and has ties to her past that even Cat herself didn’t know about.

Gregor believes Cat is his and he won’t stop until he has her. As the battle begins between the vamp who haunts her nightmares and the one who holds her heart, only Cat can break Gregor’s hold over her. She’ll need all the power she can summon in order to bring down the baddest bloodsucker she’s ever faced . . . even if getting that power will result in an early grave.

Where do I start with this book?  I will start off by saying that I am a huge fan of this series so far, but this has to be my least favorite book.  I say this not because of the writing, dialogue or the plot.  All of those things were exceptional and done great.  The problem I had with this book was the characters themselves.

Usually Cat is strong and fierce which is what I loved so much about her.  In Destined For An Early Grave, it seemed the author wanted to show the human side of Cat which would have been great— but it is not true to the character of Cat.  I have grown to love how Cat rolls with the punches and brushes her self off after each drama filled confrontation.  In this book she seemed to absorb the punches and wallow in the grief of each one.  I kept waiting for the strong and fierce Cat to rise up and stab anything that moved.

Bones changed in this book as well and it was not for the better.  Usually Bones is carefree and deeply loyal to Cat.  He has the Alpha thing going on with each book yet it was balanced just enough to make Cat equal to his personality.  In this book, I loathed the way Bones acted.  I hated his better-than-thou attitude and how he became such an overbearing abuser of his words and ways.  I literally screamed and threw my book up against the wall when I read chapter 17.  I was pissed and hurt that the author went down this path for the couple.  I almost didn’t finish reading the book because of it.

Yet, I picked my book up, brushed it off, and did what Cat should have done.  I got angry and determined to see where the author was going to take us next.  Did I relax and enjoy the rest of the book? No.  I flipped through those pages with the fury of a woman scorned and devoured it!  Yes, I started to enjoy it again, but I had a new outlook on each character.  Then when the author tried to reverse this downfall I felt confused.  I couldn’t believe how Cat just accepted it and continued on in the relationship with Bones!  I wanted Cat to beat the crap out of the “sod” and put her foot down!

Overall, while I didn’t enjoy the way things were handled between the characters, the book was great as a whole.  We lost beloved characters again in the fight, we mourned their loss, and the writer even did some drastic changes to some characters that you don’t expect.  So even though I wasn’t a fan of the choices Bones and Cat made,  I was a fan of the story by the end.

“Then you remember the dream,” Mencheres stated. “That bodes ill.”

The fear of that made my reply snappy. “Hey, Walks Like An Egyptian, how about for once you drop the formal stuff and talk like you live in the twenty-first century?”

I stared at him, then burst out laughing, which was highly inappropriate considering the very grave warning he’d just conveyed.
page 40

She was my mother. I couldn’t threaten to slap, stab, beat or even name call her. I tried to think of something to scare her into never mentioning the predicament with the Dreamsnatcher again.
“I’ll become a swinger,” I said. Her eyes bugged. Uptight rearing made her uncomfortable with alternate lifestyles. “That’s right. Threesomes, foursomes, and more. Bones knows about a thousand chicks who’d love to hop into bed with us. It’ll be kinky, we’ll get our freak on.”