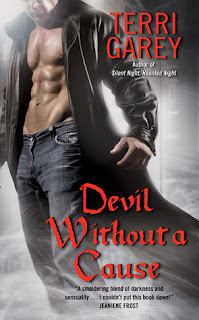 DEVIL WITHOUT A CAUSE
Author: Terri Garey
Source: Publisher
*I received this book free of charge in exchange for an honest review*


Idle hands are the devil’s workshop

Temptation and seduction are the tricks of the Devil’s trade, and when offered the chance to regain his wings by playing guardian angel, he’s hell-bent on doing things his way . . .

Faith McFarland is in need of a miracle. So desperate to save her sick child, she’s willing to make a deal with the Devil: steal a ring worn by Finn Payne, the bad-boy rockstar who long ago sold his soul for rock ‘n roll. Temptation and seduction become necessary evils, yet Faith’s salvation means Finn’s damnation . . . because the ring is all that stands between him and Hell. Falling in love was never part of the bargain, but now that they’ve tasted heaven in each other’s arms, can they convince the Devil to give up his due?

I have never read any previous books by this author even though the character of the Devil is in a previous series.  This book branches off the Nicki Styx series that the author created, focusing on the Devil’s story of betrayal and love.  That being said though, I didn’t have a hard time figuring out what was going on since this book was set as a separate story series.  Yes, there was mentioning of the character Nicki, but it left me with no confusion and actually had me interested in buying that series as well.

The Devil is portrayed a little differently than usual in this series.  Yes he is still the fallen angel Lucifer, but he goes by different names and he is sexy as hell.  He dresses with the current fads, and he even likes mingling with humans as well.  While I enjoyed his conversations with Gabriel the Angel, and his devious nature of lies and seduction, the character of Finn was my favorite by far!  A rock star who has sex appeal and a heart of gold is perfect for the single mother Faith.  They had chemistry and he stole the focus of the book!  While Faith seemed a little wishy-washy to me, I still liked her enough to keep reading the story! When she makes a deal with the Devil to save her son from cancer, she has no idea the task he set her on will lead to love and completion.  When Finn figures out what is going on, he has secrets of his own that he needs to tell Faith so they can defeat the Devil at his own game.

What I enjoyed the most is how the author made you feel sympathy and empathy for the Devil even though he is suppose to be a bad guy.  He actually seemed to be in the gray area instead of always black and white.  Pretty bad when you fall for the bad guy in the story and start cheering for him!  I wanted the Devil to have a happy ending as well.

All in all, a great new series by a great author.  The story building was great and paced nicely.  The romance was nice, even though it felt a little rushed at times.  The characters held my interest for the entire story. I also found an author who I am thrilled to add to my auto buy list!  I have even ordered the Nicki Styx series now so I can get more of the back history on the Devil!