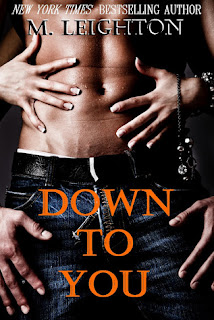 The scorching tale of one girl, two brothers and a love triangle…that’s not.

Olivia Townsend is nothing special. She’s just a girl working her way through college so she can return home to help her father run his business. She’s determined not to be the second woman in his life to abandon him, even if it means putting her own life on hold. To Olivia, it’s clear what she must do. Plain and simple. Black and white.

But clear becomes complicated when she meets Cash and Nash Davenport. They’re brothers. Twins.
Cash is everything she’s always wanted in a guy. He’s a dangerous, sexy bad boy who wants her in his bed at any cost. He turns her insides to mush and, with just one kiss, makes her forget why he’s no good for her.

Nash is everything she’s ever needed in a guy. He’s successful, responsible and intensely passionate. But he’s taken. Very taken, by none other than Marissa, Liv’s rich, beautiful cousin. That doesn’t stop Olivia from melting every time he looks at her, though. With just one touch, he makes her forget why they can never be together.

Black and white turns to shades of gray when Olivia discovers the boys are hiding something, something that should make her run as far and as fast as she can. But it’s too late to run. Olivia’s already involved. And in love. With both of them.

She wants them both.

And they want her.

How will she ever choose between them?

When author M. Leighton asked me if I wanted to read and review Down To You before release date,  I immediately said yes and made my friends green with envy.  I might have rubbed it in that I was reading it before release date and became a child on twitter with “nahnahnah” and ” neinerneinerneiner” being tweeted to them.  I apologize for my actions, but I don’t apologize for my excitement.

Let me warn readers right off the bat — you will not be able to choose Team Cash or Team Nash.  It is just not possible for your heart to choose.  With that being said, can you imagine how Olivia felt having to choose?  I felt for the girl.  I wanted to help her so much.  Let us go over the details of characters first.

OLIVIA:  Shy but won’t-take-crap-from-mean-people heroine.  She is thrown into a love triangle she does not see coming.  Refuses to settle for a bad boy again.  Looking for the good guy that will treat her right, but seems to always fall for the bad boys. Can also make kicking cocktails because she is one great bartender.

CASH:  Sexy, tattooed bar owner of Dual.  Use to be the high school bad boy and screw up of the family.  Can make a woman drool from 5 paces and likes to flirt with women.  Doesn’t have a close relationship with his twin brother — or does he?

NASH:  The clean cut twin of Cash who is one hell of a lawyer-to-be.  Dating Olivia’s rich and spoiled cousin.  Instantly attracted to Olivia and flirts with her every chance he can.  Agrees to Olivia’s terms of not acting on the flirtations in respect to her cousin.  While he is the good boy of the family, he also harbors secrets that could crumble his good-guy image.

When Olivia is attending her friends party, Cash walks into the room to announce that their stripper has arrived.  Before he can make the announcement, the girls rush him and assume he is the stripper.  The girls convince Olivia to be the one to relieve him of his clothes.  She is hesitant and shy at first, but with Cash daring her on, she quickly gets into it.  Before she makes it to his pants though,  the real stripper walks in and Olivia figures out the mistake.  She is embarrassed and humiliated but just drunk enough that she hopes she won’t remember it morning.  Unfortunately, she wakes with a hangover and dirty thoughts of Cash.  She walks into her kitchen the next morning and sees her cousin with her boyfriend.  When she looks over to her cousins boyfriend, she gets a shock.  He looks exactly like Cash and accuses him of what happened.  Her cousin laughs when she realizes Olivia has just been introduced to the twin brother of Cash.  Her boyfriend is named Nash and he is the complete opposite of Cash.

Seriously, how is a girl not suppose to fantasize about two hot twin brothers who happen to flirt with her?
Oh there is a plot involved that does involved murder, mobs, and actual heartache,  but the guy factor alone is enough to keep a reader going.

I will give you a hint to this book though.  Just when you think you have your decision of who Olivia should be with, you are wrong.  Don’t argue with me!  You. Are. Wrong!  Also, pay attention to the smallest of details that the author provides in the narration and such.  It does mean something and is in no way words to fill pages to make a word count.  Again, everything you think will happen will be in the wrong and you will have plenty of jaw dropping moments that you will have bruises on your chin by the end of the book. Also be prepared for an ending that will be open for another installment.

Down To You brought sexiness and hot guys Down To Me and I want more!!!  I am just going to make my own Team Hashtag for this one and start using #TeamCNash !!!

Outstanding book that will stay on my bookshelf for rereading!
BUY FROM AMAZON
*I received an ARC ebook copy of this book for free in exchange for an honest review*