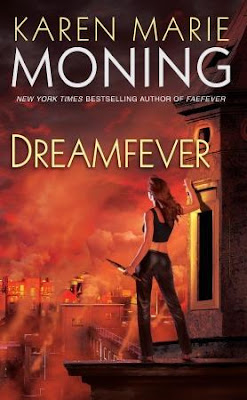 He has stolen her past, but MacKayla will never allow her sister’s murderer to take her future. Yet even the uniquely gifted sidhe-seer is no match for the Lord Master, who has unleashed an insatiable sexual craving that consumes Mac’s every thought-and thrusts her into the seductive realm of two very dangerous men, both of whom she desires but dares not trust.

As the enigmatic Jericho Barrons and the sensual Fae prince V”lane vie for her body and soul, as cryptic entries from her sister’s diary mysteriously appear and the power of the Dark Book weaves its annihilating path through the city, Mac’s greatest enemy delivers a final challenge…

It’s an invitation Mac cannot refuse, one that sends her racing home to Georgia, where an even darker threat awaits. With her parents missing and the lives of her loved ones under siege, Mac is about to come face-to-face with a soul-shattering truth-about herself and her sister, about Jericho Barrons…and about the world she thought she knew.

I think that this book in the series just might be my favorite so far. Maybe it is because Barrons and Mac FINALLY do some sexy, even if she is not in her right mind, or maybe it is just because Mac is actually becoming a stronger person throughout all of the evil.  I am not sure, but I do know that the writing is better and the story is really heating up!


When Barrons returns with Mac, she is now Pri-Ya.  She is reduced to being addicted to sex and that is the only thing her body can think about.  With Barrons help, he brings Mac back from the Pri-Ya state, but she has also evolved into a much stronger and more determined Mac.


The author has also developed her secondary characters in this book to the point to where we know they are going to be major players in the final book.  Everyone and every clue is starting to come together, but if I know this author after 4 books, nothing is going to be so easy to figure out.  I know she is going to have plenty of plot twists that are simply going to leave your jaw dropping and and our heads swimming in shock! As it was, I was NOT expecting the ending of this book to be what it was.  I couldn’t believe the author would do this to us!  Without even telling you who the beast is, you just know!  Only one person could have brought that much fear to Mac when she realized who it is and the reader has not.


Overall, one of the best books in the series so far!  I look forward to the final installment in this series and seeing what the author can shock me with next!  Bring on the fever!

“Don’t leave me.” I thrash in the sheets.
“I’m not, Mac.”
I know I am dreaming then, because dreams are home to the absurd and what he says next is beyond absurd.
“You’re leaving me, Rainbow Girl.”
page 45

“Are you fighting over me, MacKayla?  I find this…attractive.” V’lane tossed his golden head. “I have seen this in humans before.  It is called jealousy.”
“If that’s what you think, you have a problem interpreting subtle human emotions.  It’s not called jealousy.  It’s called ‘you’re pissing me off.’ “
“Possessiveness.”
“My ass.”
“Is far more shapely than last I saw it.”
“She’s been working out.” Dani snickered.
page 88