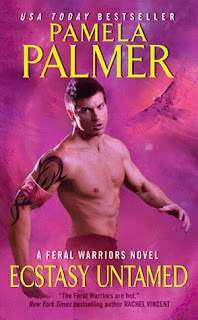 
Shattered by recent nightmarish events, Hawke feels his bond with his animal spirit weakening—and once it breaks, he’s finished. The arrival of Faith sends his life spinning even further out of control, for although she delights him and enflames his deepest primal passions, she’s promised to Maxim, the newest Feral Warrior.

Faith is drawn to Hawke from the start, but Maxim holds her in his thrall and has secretly bent her to his malevolent will. Though gravely damaged, Hawke is the only one who can end Faith’s slavery and protect the Feral Warriors from Maxim’s evil designs. But first they both must embrace the wild . . . and surrender body and soul to a forbidden, all-consuming ecstasy.

Hawke is back and be still my heart! I finally made it to my favorite Feral Warrior and his tortured story.  I think I didn’t eat, sleep or do much of anything while reading this book.  Even my kids steered clear of me.

Hawke has been rescued from the spirit trap and he is not the same as when he went in.  His animal is fighting with him and causing him to shift.  Even though he is trying to fight the rage and the unwanted shifting, when the animal does take over it takes him to the sky for hours.  When he is in his hawk form, he isn’t even remembering it.  If he doesn’t get his animal under control soon,  he will eventually die.

Faith is a Therian living in Poland.  When out one night she is attacked by Daemons.  A handsome stranger comes to her rescue and convinces her that they are mates.  He sweeps her away to the Feral House to claim his animal that he is marked with.  Maxim is not what he seems though.  He is cold, cruel, and definitely not the next Foxx.  Some animals were never reborn into the next Feral intended until the spirit trap was breached.  Now they are finding themselves being introduced to them rather quickly.  In this we see the true nature of Maxim and the true evil he is capable of.  Seriously, by the end of Chapter 6, this book becomes dark, dirty and flat out suspenseful.  Be warned and be ready to have your heart flutter in fear.

As if the author couldn’t torture us enough after that, the readers learn a secret about Faith that could change everything.  Will she reveal it to Hawke and the other Warriors? If she does, will she do it in time? Can she save Hawke and make him realize what is truly wrong with his animal spirit? Well, my lovely readers — you will have to read the book.

The ending was bittersweet for me.  It is left with a climatic ending that makes me scream in frustration because we have to wait for the next book!  Release day will not arrive soon enough for this fan. I wonder if I could bribe author Pamela Palmer for some hints and secrets?

“His legs are regrowing.  Along with everything in between.”
Several of the Ferals blanched.
“There’s nothing in this world more painful than regrowing a penis.” Kougar said quietly.
“It’s taking longer than the legs.” Olivia crossed her arms tight as if shielding herself as another of Jag’s yells echoed through the house.
“That’s part of the reason it’s so painful.  It takes forever.”
“How much longer?” Olivia asked.
“Another hour, maybe.”
Every man shuddered this time.  Olivia squeezed her eyes closed. “It better come back as good as new, that’s all I’m saying.”
–page 195

Vhyper shook his head.  “You couldn’t be the Wicked Witch of the West.  You have to be all Tinker Bell cute and sunny.”
–page 236 / Vhyper talking to Faith

Outstanding book that will stay on my bookshelf for rereading!
BUY ON AMAZON