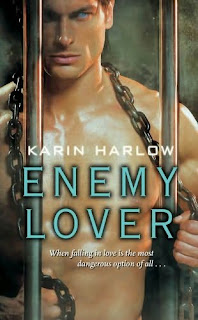 ENEMY LOVER
Author: Karin Harlow
Source: Publisher
* I received this book free of charge in exchange for an honest review*
SYNOPSIS:
When you have no alternative, then you call in L.O.S.T. Because with the Last Option Special Team, it’s do or die. . . .
It’s Jax Cassidy’s first mission for L.O.S.T.—one that will give the former cop who went rogue a chance to prove herself. Her assignment: gain the trust of assassin Marcus Cross . . . eliminate him . . . then take down Marcus’s mentor, Joseph Lazarus, a man with a bold eye on the White House. But the woman who’s known by her team for being a femme fatale succumbs to passion, only to discover Cross’s deadly secret. He’s a vampire, and Joseph Lazarus is his creator.
Left for dead by his platoon in the violent hills of Afghanistan, Special Ops sniper Marcus Cross was given a second chance at life. His newly heightened skills make him the perfect killing machine, and as Lazarus’s right-hand man, he’s quickly rising to the top of his dark empire, purging enemies with speed and precision. Only when dangerous beauty Jax Cassidy is sent to bring him in does he begin to question Lazarus’s motives and his own actions. But when Jax’s life is threatened by the one thing that can destroy them both, Marcus must make a bitter choice—her death or his.
MY THOUGHTS:
I love it when books start out with a bang and keep you interested from the get go.  What caught my interest with this book at first was the cover.  Then I read the first page and was hooked! This book has the suspense and thrill to keep you on the edge of your seat, the paranormal vampire to keep you sucked in, and the skillfully moving plot that will keep you reading until the last page.
Now this book wasn’t all about romance.  It was a darker read than I normally would pick up. I would classify this as more of an Urban Fantasy book.  It has more butt-kicking suspense than between the sheets love.
MY RATING: