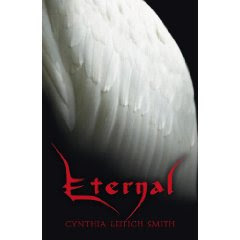 At last, Miranda is the life of the party: all she had to do was die. Elevated and adopted by none other than the reigning King of the Mantle of Dracul, Miranda goes from high-school theater wannabe to glamorous royal fiend overnight.

Meanwhile, her reckless and adoring guardian angel, Zachary, demoted to human guise as the princess’s personal assistant, has his work cut out for him trying to save his girl’s soul and plan the Master’s fast-approaching Death Day gala.

I had mixed emotions about this book as I was reading it. In the beginning, I enjoyed the characters of Miranda, Zachary and even Lucy and Josh. I loved how it alternated between Miranda’s and Zachary’s point of view. We got a chance to see the thoughts and feelings from both main characters of the book. Then the plot thickens. Miranda dies and becomes a vampire. Zach, who was Miranda’s Guardian Angel falls. They both get a new guardian angel named Josh. Lucy all but vanishes out of the book except for a few mentions here and there. I found the middle of this story boring and wanting to get to better stuff. Then BAM! The last part of the book turns to adventure and action and moving fast! I found myself loving the character of Zach and caring more about him through the whole book instead of Miranda. Josh gave me plenty of LOL moments and he was only a secondary character in the book. By the end, I wanted to throw the book up against the wall and curse up a storm. WHY? Not because I hated the ending, but because of the way it ended. It did not end the way I expected and it ticked me off. LOL. It will not end the way you want it to, but you will still find yourself enjoying the ending anyway. It leaves it open for the next in the series and I can’t wait to see what happens next!

OF LIGHT AND DARKNESS | MySpace Video