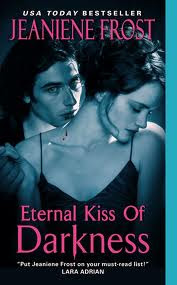 ETERNAL KISS OF DARKNESS
Author: Jeaniene Frost
SUMMARY:
An immortal war has been brewing in the darkness…and now one woman has stumbled into the shadows.

Chicago private investigator Kira Graceling should have just kept on walking. But her sense of duty refused to let her ignore the moans of pain coming from inside a warehouse just before dawn. Suddenly she finds herself in a world she’s only imagined in her worst nightmares.

At the center is Mencheres, a breathtaking Master vampire who thought he’d seen it all. Then Kira appears – this fearless, beautiful….human who braved death to rescue him. Though her burns for her, keeping Kira in his world means risking her life. Yet sending her away is unthinkable.

But with danger closing in, Mencheres must choose either the woman he craves, or embracing the darkest magic to defeat an enemy bent on his eternal destruction.

MY THOUGHTS:
The first thing I need to say about this book is if you haven’t read anything by this author before, what rock have you been hiding under? Ms. Frost can mix suspenseful paranormal effortlessly with romance and humor.  She writes incredible stories with characters that will capture your interest and will leave you wanting to know even more after the last page has been turned!
Kira is a private investigator on her way home late one night.  When she hears noises from a warehouse, she chooses to investigate.  What she walks into though is something she can hardly believe.  She sees Mencheres being tortured by ghouls. When she attempts to rescue him, the ghouls attack her.  What Kira doesn’t know is Mencheres is a vampire. Actually, he is a Master Vampire who is looking for an end.  He was hoping that the ghouls would have finished him off to where he could end his long undead life. When Mencheres sees the ghouls attack Kira instead, he lets his power loose, and kills them off.  He notices that Kira has witnessed it all, and heals her before she can die.  The only problem is Mencheres is having a hard time erasing her memories and being able to read her mind. He takes her to his home and tries to explain things to her.  Kira accepts what she is being told and falling for the vampire at the same time.  Mencheres falls for Kira as well, but is hesitant on being with her since his visions have shown him nothing but his death approaching.
I found the story between the two wonderful.  I loved the bickering and the banter between them when they were around each other.  I loved the suspense that Mencheres’ enemy, Radjedef brings to the story as well.  Kira was strong and determined which made her character fun and intriguing.  The romance between the two was hot one moment, and tender the next.
I can’t wait for the author to finish the next book in the series.  I would love to see Vlad have a story as well in this series.  The side characters were so wonderful that they deserve a story all of their own.
The only problem with this book for me was the cover!  What was up with the fake looking cover? While the people on the front were great, the blood drops looked like an after thought when printing was complete. It actually looks like someone took a red sharpie to each cover after printing and looks horrible! The photo above is nothing what the cover looks like in your hand! Trust me! That would be the one thing that I would want to be fixed for the next books.  Please figure out how to make a cover art department!
MY RATING:

Outstanding Book That Will Stay On My Bookshelf
For Rereading!  5 STARS

3 Responses to “Eternal Kiss of Darkness by Jeaniene Frost”