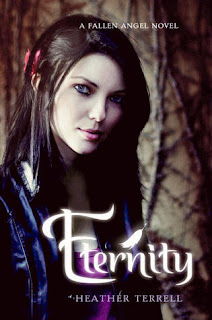 As Ellie comes to grips with her destiny as the Elect One, her relationship with Michael grows tense. When she meets a mys­terious boy named Rafe, things get even more complicated.

Yet the time has come for the Elect One to stand against the group of evil fallen angels who are bent on destroying the world. In order to face the immeasurable malevolence heading her way, Ellie tries to put her personal life aside. But she soon learns that whoever holds her heart also holds the key to mankind’s salvation—or destruction. As the end days approach, Ellie is faced with an epic decision. Who does her heart really belong to? And is her love strong enough to save the world?


I had a really hard time getting into this book for the simple fact that the first book in the series didn’t wow me enough to keep the story fresh and memorable.  I struggled to remember what had happened in the first book to make sense of what was going on in this one.  After a few chapters though, the puzzle started coming together better and I started to remember bits and pieces of the previous book.

The book starts out shortly after the previous one ended.  Ellie is back home and needs to keep up the pretense of not knowing everything that she discovered in the previous book.  She isn’t sure who remembers and who was forced to forget so she puts up her walls of defense and goes about her day as a normal teenage girl.  When she realizes that Michael remembers everything as well, they agree to keep it quiet so the Fallen are unable to track them.  Enlisting the help of Ellie’s best friend Ruth, they try and figure out the seven signs of the end of the world in hopes of figuring out their roles in the coming fight.

Michael has been changing lately and Ellie can’t figure out why he isn’t acting like the boy she fell in love with.  When Ellie is introduced to Rafe at a school fundraiser, she feels herself attracted to him but not in a romantic way.  Sure he is cute and caring, but she knows her heart lies with Michael.  When Rafe exposes what he really is to Ellie and Michael, they find themselves training and learning about their roles for the final fight.

The book actually moved at a faster pace than the first book in the series.  I found myself reading this book quickly and enjoying the plot of it better this time around.  I felt a better connection between Michael and Ellie as well.  The prologue gives you a great hint at what is to come in the end, but you will still be pleasantly surprised about it all.  The one thing I thought was a little far fetched was how easy it was for Michael and Ellie to defeat some of the Fallen.  If they are suppose to be twice as strong as Ellie and Michael, how were they able to take them down so fast and easy?

Overall a great conclusion to the series– at least I am assuming this is the final book.  If you haven’t read the previous book in the series though, I recommend you reading it first to avoid confusion.  This is one that is definitely not a stand alone novel.