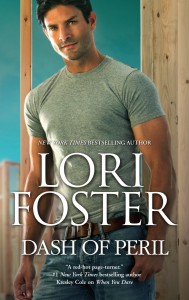 Still haven’t had a chance to start any books by this author?
Want a sneak peek before you read Dash of Peril?
Well here we go!

Dash studied how Margo held her left arm slightly out from her body. His brows flattened. “Why didn’t you say something about your elbow?”
She closed her eyes, almost like she couldn’t help herself. “What could you have done about it?”
No idea, but she still should have told him. “When I took you from your car—” God, he’d thrown her half over his shoulder then literally jogged with her in that position.
“It hurt like hell, but being shot would have been worse.” Pale with pain, Margo added, “You did great, Dash. Better than I’d expected.”
What had she thought? That he’d fall apart? Maybe hide behind her—the big, bad lieutenant?
More anger simmered to the surface, and that really pissed him off. He never got angry. Why should he? He’d been blessed in too many ways to count.
He had parents who adored him and a brother that would make anyone proud.
Most would call him wealthy, but because the money didn’t mean that much to him, he preferred the term financially secure.
Inherited genes gave him height and strength, a fit body that he’d honed in his construction company—a body that appealed to women.
That brought him back around to his disgruntlement toward Margo…the one woman who rebuffed him at every opportunity. Now he knew she considered him a wimp.
In the face of more pressing problems, he decided to work that out with her later. He could hear her teeth chattering, so he settled back against the wall beside her and carefully drew her to his side to both support her and share heat.
“If you weren’t here…” she whispered, then swallowed. “If you weren’t here, I would be dead.”
“No.” He wouldn’t even consider that possibility. He kissed her head, tucked her face against his throat.
She gave in, closing her eyes. “It’s not easy for me to admit, but I’m so glad I’m not alone.”
“Yeah, me, too.” He had no problem admitting it. He was here with Margo, holding her, protecting her, and he wouldn’t have it any other way.

Dash leaned against the wall outside the bathroom, listening to the occasional ripple of water. In his mind, he could almost see her, so strong and brave and independent.

But equally small and soft and so badly hurt.

He pressed the heels of his hands to his gritty eyes, trying to fight off the exhaustion. Now that he had Margo back in her own home, safe and sound, the adrenaline dump left him weary. “You’re not getting the splint wet, are you?”

Hearing the strain in her voice, he wanted to curse. The doc claimed her arm would cause considerable pain for at least a few days.

Struggling in and out of the tub, washing her hair, soaping up her body…

Damn, but the visuals were killing him.

“Margo? You sure you don’t need any help? You have to be hurting.”

Damn it. Why wouldn’t she trust him a little?

He pushed away from the wall, paced a few feet and came back. He felt ridiculous, fretting outside her door, waiting for her to admit that she needed him.

He had a feeling she would prefer everyone see her as a hard-ass. When it came to him, she was doomed to disappointment.

He waited another five minutes, then said, “You need to come out now, Margo.” Much as he relished the thought of assisting her, if she fell asleep in the tub she could end up hurting herself more.

He waited. If she were any other woman he’d be treating her with kid gloves. But this was Lieutenant Peterson, the ballbuster, and he knew her well enough to know she’d detest sympathy.

When the door opened, he straightened in anticipation.

She hadn’t really dried her hair and little rivulets of water ran down her silky neck and disappeared into the collar of a large, soft robe that fit over her splint and was only loosely tied around her petite frame. Without makeup, the stitches and bruising were even more obscene.

His heart gave a soft thump—and he knew he was a goner.

2 Responses to “Excerpt: Dash of Peril by Lori Foster”