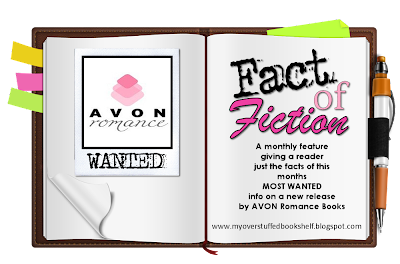 Fact of Fiction is a new monthly feature here on My Overstuffed Bookshelf.
On the first of the month,  I will be featuring one book from AVON/HarperCollins that is releasing and is sure to be a big hit among readers.
Be sure to add this months new MOST WANTED to your list of purchases! 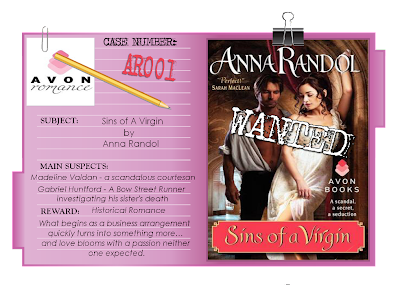 SINS OF A VIRGIN
Author: Anna Randol
Release Date: August 28th, 2012
ISBN: 9780062025791
SUMMARY
There is improper, there is scandalous… and then there is Madeline Valdan. To the world, Madeline Valdan is a scandalous courtesan, with society’s most eligible gentlemen at her feet. But no one knows her shocking secret: she has never experienced the most intimate touch of any man. So she astonishes the ton by telling them the truth . . . and by announcing the auction of her virginity to the highest bidder.
Handsome and disciplined, Gabriel Huntford knows his time is best spent hunting down criminals from the darkest corners of London. As a Bow Street Runner investigating his sister’s death, he has no desire to join London’s strutting peacocks in this competition when there are more important tasks at hand. Now, his quest leads him to one of Madeline’s “suitors,” so he agrees to help this sinful woman. But what begins as a business arrangement quickly turns into something more . . . and love blooms with a passion neither one expected.
BUY AT THE FOLLOWING
AMAZON
BARNES & NOBLE
INDIE BOUND
BOOKS A MILLION
SONY
KOBO BOOKS
iTUNES