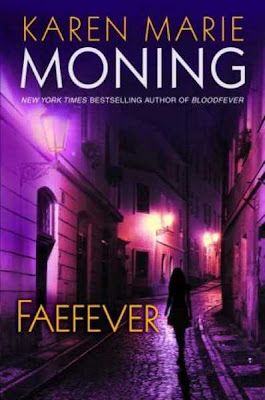 He calls me his Queen of the Night. I’d die for him. I’d kill for him, too.

When MacKayla Lane receives a torn page from her dead sister’s journal, she is stunned by Alina’s desperate words. And now MacKayla knows that her sister’s killer is close. But evil is closer. And suddenly the sidhe-seer is on the hunt: For answers. For revenge. And for an ancient book of dark magic so evil, it corrupts anyone who touches it.

As All Hallows’ Eve approaches and the city descends into chaos, as a shocking truth about the Dark Book is uncovered, not even Mac can prevent a deadly race of immortals from shattering the walls between worlds—with devastating consequences.…

Just when I thought I was warming up to Barrons being a better whatever he is, the author throws me for another loop and has me pulled in another direction!  Barrons was starting to grow on me.  Yes he is still a jackass, but I have learned that he has his reasons that he refuses to share.  This book though, he pushed me to my limits.  I was outraged with the way he was treating Mac.  I can’t believe he got so pissed off by a small gesture of birthday cake!  Here we have Mac that is thrown into this war of Fae, and that man–and I use the word man skeptically–won’t give her an inch of nice.

page 140:
“It’s not like you don’t keep secrets from me!” I finally shouted against his ear.
“I don’t keep ones from you that involve the fucking Book,” he snarled over his shoulder.  ” That’s our deal, isn’t it?  If nothing else, we’re honest with each other about the Book.”
“I don’t trust you!”
“And you think I trust you?  You haven’t been out of fucking diapers long enough to be trusted, Ms. Lane! I’m not even sure you should be allowed to handle sharp objects!”

Then we have V’lane who has been trying hard to forge some type of trust with Mac.  He may have ulterior motives, but so far he is the only one who is trying to give her any type of information that she could use.  Rowena, the supposed Grand Mistress of the Sidhe-seers, is nothing but a nasty and mean lady that I wish would fall on that Fae Sword of hers.


There were points in the book where I got so frustrated because Mac will not choose an ally.  I understand that there are many players in the game, but come on!! Pick one and stand by your decision.  I am still holding out hope that Barrons will be her proverbial Knight In Shining Armor that she needs.


The ending of this book left me with my jaw dropped and thinking that Mac can’t take much more.  The author is taking me on a wild ride and it is one that has not slowed down much at all.  I will say that this book in the series so far is my least favorite.  It could be because I am expecting certain things and the author is refusing to give it to me.  The authors seem to like pushing their readers to the breaking point just as much as they push their characters.  I will hold out hope that there will be some light at the end of the tunnel though.  The author states at the end of the book that it is about light and that this story is not about darkness.  So far all I have read is darkness and I am feverishly waiting for that light!