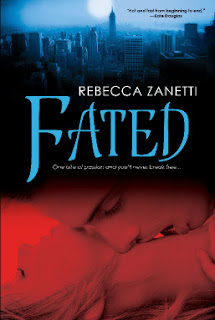 FATED
Author: Rebecca Zanetti
Source: Publisher
*I received this book free of charge in exchange for an honest review*

Cara Paulsen does not give up easily. A scientist and a single mother, she’s used to fighting for what she wants, keeping a cool head, and doing whatever it takes to protect her daughter Janie. But “whatever it takes” has never before included a shotgun wedding to a dangerous-looking stranger with an attitude problem. . .

Sure, the mysterious Talen says that he’s there to protect Cara and Janie. He also says that he’s a three-hundred-year-old vampire. Of course, the way he touches her, Cara might actually believe he’s had that long to practice. . .

Fated is the first book of a three part series.  I will admit that I had a hard time reading this book.  Usually I love the main male character being in Alpha mode.  With this book though, the Alpha male seemed more of pushy and forceful male that was not as attractive as I wanted him to be.


Yes, the book was steamy in in the sex factor, and yes it had the paranormal vampire story that is hot right now, but the way the two are thrust together was not impressive to me.  Cara has a daughter to think about and she was suppose to just accept being away from her daughter? For five weeks? Um, no.  She was just suppose to fall in love with Talen and jump into bed with him while there is danger lurking around? Um, again no.  While some of this plot could have been believable, the way it was written left me with the feeling that the author was trying to force their relationship to work when I was having too many doubts. Plus he practically forces her to “mate” with her after she tells him repeatedly no.


Again, I wasn’t a big fan of the story.  If you like your alpha’s with a very forceful nature, then give it a go.  You might enjoy it, yet I think Talen could have been a better character if it was toned down quite a bit. The only thing that saved this story from getting a one star rating was the fact that I fell in love with Cara’s daughter. She was a delight whenever she was in a scene.