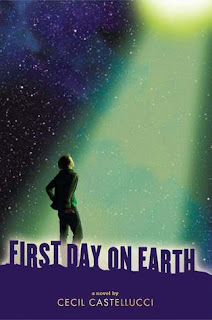 FIRST DAY ON EARTH
Author: Cecil Castellucci
Source: Publisher
*I received this book free of charge in exchange for an honest review*

A startling, wonderful novel about the true meaning of being an alien in an equally alien world.

“We are specks. Pieces of dust in this universe. Big nothings.

Mal lives on the fringes of high school. Angry. Misunderstood. Yet loving the world — or, at least, an idea of the world.

Then he meets Hooper. Who says he’s from another planet. And may be going home very soon.


I am not a big fan of alien abductions and such, but I decided to give this book a chance since it was sent to me for review.  I was actually surprised to find that it wasn’t too bad of a book.  While I am still not a fan of aliens, the author did a wonderful job in exploring this type of plot line.

Mal lives with his often drunk mother after his father walked out on them years ago.  He tries to take care of his mother the best way he can, but he also has issues that he is dealing with and no one to talk to about them.  Mal believes he was abducted and returned to Earth days later.  The doctors and specialists all agree that he had a seizure or a psychotic break to explain his disappearance in the desert.

When Mal mistakenly finds himself in a Alien Abduction Support group one night, he finally feels like someone might understand and believe what happened to him.  It is there that he finds and befriends Hooper who seems to be different than the rest of them.  Hooper tells him that he wasn’t abducted but that he is in fact and alien from a different planet.  He means no harm to humans since his race is based on exploration and adaptation. Hooper though is leaving soon to his home planet and Mal will need to decide if he wants to go with Hooper or stay on Earth.

The book is a fast read and the writing is well done in this story.  I wish it could have been a bit longer though so we could see more of Hooper interacting with people on Earth.  Like I said, I may not be a fan of alien stories, but this one was written well enough to keep me interested until the end.  If you want to step out of your normal reading zone, give this one a try and get a taste of alien life on Earth.