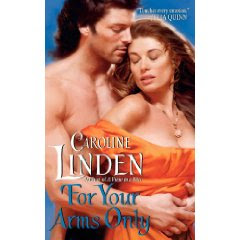 For your Arms Only (PREVIEW)
Author: Caroline Linden

He was once a distinguished army officer, a man of honor and heroism. But that was before Alexander Hayes was wrongly accused of treason. Forced to abandon everything he held dear, Alec became a spy for England in an attempt to clear his name. His latest commission sounds simple: locate a retired soldier gone missing. But it also sends him back home, to a family who’d thought him dead for five years—and a woman who’d like to shoot him.

Everything Cressida Turner’s ever heard about Alec tells her that he’s a traitor of the worst kind, and yet this enigmatic, infuriating, and utterly captivating man may be the only person she can trust—and the only one who can find her missing father. With nowhere else to turn, she reluctantly joins forces with Alec, unprepared for both the dangerous secrets that threaten them and the relentless passion that drives them into each other’s arms.

First of all, let’s all thank Christine from Harper Collins for offering the following for us. Christine was kind enough to send to me to share with you the links below for all my readers of my blog.

Here is the first chapter of this upcoming book: For Your Arms Only

I hope you all will consider reading this authors new book and spreading the word of her new release. I know I can’t wait to start For Your Arms Only!

Thanks again Christine for sharing it with us!