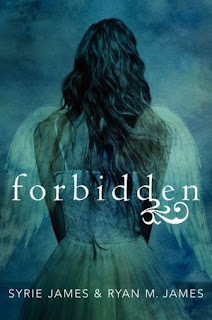 She should not exist.


He should not love her.


Claire Brennan has been attending Emerson Academy for two years now (the longest she and her mom have remained anywhere) and she’s desperate to stay put for the rest of high school. So there’s no way she’s going to tell her mom about the psychic visions she’s been having or the creepy warnings that she’s in danger.


Alec MacKenzie is fed up with his duties to watch and, when necessary, eliminate the descendants of his angelic forefathers. He chose Emerson as the ideal hiding place where he could be normal for once. He hadn’t factored Claire into his plans. . . .


Their love is forbidden, going against everything Alec has been taught to believe. But when the reason behind Claire’s unusual powers is revealed and the threat to her life becomes clear, how far will Alec go to protect her?

Forbidden is written by a Mother and Son.  Both contribute to the works in the book and give us perspective from Alec and Claire’s point of view.

While the book started out with strength,  as I read further into the book it started to falter.  I personally enjoyed the side characters better than the main characters.  Claire’s friends were refreshing and humorous.  I loved their witty comments and they brought much more to the story than Claire and Alec.

Claire is always on the move with her mother.  They never seem to stay in one place long enough and Claire has no idea why.  They have lived in their current residence for two years now and Claire really enjoys her school.  It is a private school so she has to keep up her GPA and grades to attend.  This isn’t really much of a problem though since she is super smart and works hard to keep her grades from slipping.

Alec is a mystery in this story.  He has a secret past that he is running from and wants to attend high school for the first time.  He meets Claire and her friends during registration day and becomes part of their group.  He has the instant attraction to Claire even if she has hopes of becoming better friends with another boy at school.

I wasn’t a fan of the instant love between the two main characters.  At times it even felt forced.  I also couldn’t  get attached to Alec because of his personality.  At times he would be mature and act his age.  Other times it was like he was reverted back to middle school with some of his actions and personality change.  Claire was also a little dense at times.  She couldn’t figure out why Alec would get so depressed or moody whenever she would mention the other boy Neil that she had a crush on.  It was obvious Alec loved her, but she couldn’t seem to see the obvious signs.

When some of the mystery starts to unravel and things start to clear up a little, you finally think you are going to get some answers.  While some things are clear,  there were other things that were left open that needed closure for this book to be better.  To me the book felt a little incomplete by the last page.

While I can see the younger teens enjoying this book,  I feel that the older teens and adults will have some issues with it.  If there is going to be more books in this series, I do hope the authors can work together at getting the actions and personalities straight for the ages their characters are.