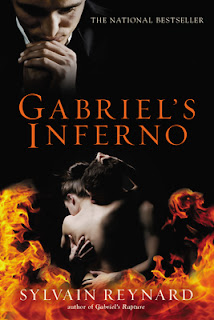 
Enigmatic and sexy, Professor Gabriel Emerson is a well-respected Dante specialist by day, but by night he devotes himself to an uninhibited life of pleasure. He uses his notorious good looks and sophisticated charm to gratify his every whim, but is secretly tortured by his dark past and consumed by the profound belief that he is beyond all hope of redemption.

When the sweet and innocent Julia Mitchell enrolls as his graduate student, his attraction and mysterious connection to her not only jeopardizes his career, but sends him on a journey in which his past and his present collide.

An intriguing and sinful exploration of seduction, forbidden love, and redemption, Gabriel’s Inferno is a captivating and wildly passionate tale of one man’s escape from his own personal hell as he tries to earn the impossible—forgiveness and love.

Before I start my review on this book, I want to add some info that I discovered about this book.  You may have heard it already but I am going to add it for the simple fact that there could be others who don’t know since I didn’t.  Sylvain Reynard is a pen name.  While I am not sure who the true author is — and there has been speculation from everyone — I did find out that this book was originally titled The University of Edward Masen by Sebastian Robichaud.  Yes everyone, this is another book based on Twilight Fan Fiction.

While I don’t mind reading Twilight fan fiction,  I do want to state that Gabriel’s Inferno didn’t seem to have the echo’s of Twilight to me.  While some intense readers might be able to spot the similarities,  I didn’t know about it being based on the Fan Fiction so I didn’t find many as I was reading.

I have to wonder though why this book has so many high ratings.  While the book wasn’t  horrible, there were definitely some problems with it in this readers mind.  Instead of going through a full review of this book, I am going to just point out what did and didn’t work for me.  Other readers are more than likely going to disagree with my opinion — since this is a popular book at this time — but I am going to put it out there anyway.

— Julia Mitchell has to be the most naive and weakest heroine I have ever read about.  She first meets Gabriel at a young, impressionable age and he has just been in a fist fight with his family.  He is drunk and she willingly goes walking with him and puts her complete trust in him.  Plus he is 10 years older than her. Yes readers, she is under age.  She immediately falls madly in love with him and never forgets him.

— When they do meet up again — after Julia decides to become a student in his class where he is a Dante Specialist — he doesn’t recognize her and is, well, a class A jerk to her.  He doesn’t improve much until later on in the book. Way later on.

— Once Gabriel finally figures out who Julia is — his alcohol induced fantasy angel of Beatrice — he suddenly turns into Mr. Nice Guy.  Not just nice, but overly sweet and nauseating.  If I had to read how he wanted to worship his innocent and inexperienced Julia/Beatrice much more, I think I would have ripped the book apart.

Now those things mentioned above are the main reasons I found this book lacking.  I won’t get into the details of how disappointing the reasons were in why Gabriel and Julia were the way they were, but I will say that it wasn’t some big shocking secret that should cause what it did. I have read worse in other novels and it was far more believable. I also felt like I was reading a textbook because of the SAT like words that were thrown in with each page.  I think I used my dictionary more reading this book than I did in high school.

With all that being said, you are probably wondering if I would read the second book.  Well, yes I would. Why you might ask? For the simple fact that the story still needs to play out.  We have read about their long journey to acceptance, forgiveness and finally some smexy time.  I need to read the next one to hopefully read some angst, conflict and even more smexy time.  I am hoping that the author has left the best for the next book because this book definitely didn’t live up to the expectations that I was hoping for.

I did not like this book at all!
BUY FROM AMAZON
*I received this book free of charge in exchange for an honest review*