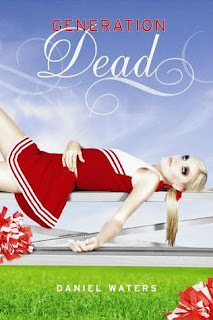 Phoebe Kendall is just your typical Goth girl with a crush. He’s strong and silent…and dead.

All over the country, a strange phenomenon is occurring. Some teenagers who die aren’t staying dead. But when they come back to life, they are no longer the same. Feared and misunderstood, they are doing their best to blend into a society that doesn’t want them.
The administration at Oakvale High attempts to be more welcoming of the “differently biotic.” But the students don’t want to take classes or eat in the cafeteria next to someone who isn’t breathing. And there are no laws that exist to protect the “living impaired” from the people who want them to disappear–for good.
When Phoebe falls for Tommy Williams, the leader of the dead kids, no one can believe it; not her best friend, Margi, and especially not her neighbor, Adam, the star of the football team. Adam has feelings for Phoebe that run much deeper than just friendship; he would do anything for her. But what if protecting Tommy is the one thing that would make her happy?
MY THOUGHTS:
Who knew zombies could be so sweet and fun?  I loved this book.  The cover was amazing and that is what attracted me to it in the first place.  We have Phoebe, who is the goth type in school.  She befriends Tommy, who happens to be one of the zombies that has started school.  At first there aren’t many zombies, but they slowly start coming out of hiding and starting school in Phoebe’s town.  They try to integrate themselves into the mix again. In this book, zombies are only teens.  Phoebe starts to fall in love with Tommy, but she also must deal with her friendship with Adam, her childhood friend and neighbor.  Adam realizes his feelings for her have grown, and we soon get sucked into the love triangle.
This book was very well written and the pace was great.  I loved this book so much, that I ordered the next book in the series from Amazon and will be reading it as soon as it gets here!  A great new young adult paranormal read that even adults will love!
MY THOUGHTS: