Thanks to Harlequin, I have 3 copies of Marrying For King’s Millions by Maureen Child to give away. 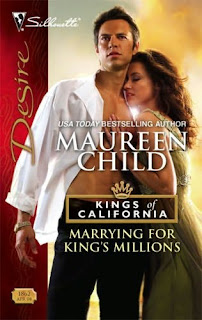 Wed and bed one of his biggest client’s unsavory daughters? No thanks. But the only way millionaire Travis King could get the man off his back was to marry someone else. So he handpicked his temporary and on-his-terms bride– hometown girl Julie O’Hara. The woman was desperate and should easily fade into the background. And, as per their contract, she’d do exactly what he wanted during their year of platonic marriage. Unless what he wanted began to change.…
TO ENTER:
–Just leave a comment with your email address.
–You don’t need to be a follower to enter, but would be wonderful!
–Share with others the link if you want!
CONTEST ENDS:
3/24/2010
WINNER ANNOUNCED:
3/25/2010