Today I have great giveaway! Thanks to Sourcebooks, I have the following book to offer you! 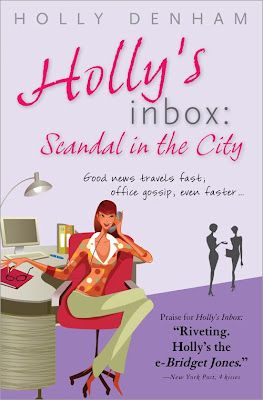 SUMMARY:
Dear Holly, isn’t it shocking…?
Things are finally going Holly Denham’s way: she’s in love, she’s getting the recognition she deserves at work, and her friends and family have graciously opted to avoid disaster for the moment.
Just when Holly is starting to settle into her new life, scandal erupts and Holly finds herself—and her in box—at the center of a gossip whirlwind that threatens everything she’s worked so hard for.
Written entirely in emails, this follow-up to the UK smash hit Holly’s Inbox will keep you glued to its pages as the scandal running rampant in the city threatens to ruin Holly’s hard-earned and long-awaited happiness.
RULES:
1. USA only this time as I am using my low funds to ship this time!
2. No need to be a follower, but I would love it if you would be!
3.  Just  leave a comment with an email address for me to contact you!
4. Contest will run until 9/10/2010 and winner will be announced the following day.

24 Responses to “GIVEAWAY: Holly’s Inbox-Scandal in the City by Holly Denham”