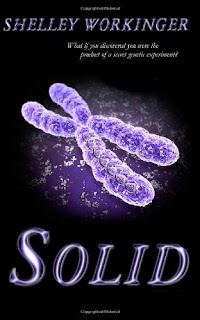 SOLID
Author: Shelley Workinger
Genre: Young Adult/Paranormal
Eighteen years ago, a rogue Army doctor secretly experimented with a chromosomal drug on unknowing pregnant women. When he was killed not long after the children were born, any knowledge and evidence seemed to die with him – except for the living, breathing, human products of his work. Almost two decades later, the newly self-proclaimed “open-book” military unearths the truth about the experiment, bringing Clio Kaid and the other affected teens to a state-of-the-art, isolated campus where they soon discover that C9x did indeed alter their chromosomes, its mutations presenting as super-human abilities. The military kids, who come from across the nation and all walks of life, come into their own as lighter-than-air ‘athletes’; ‘indies’ as solid as stone walls; teens who can make themselves invisible and others who can blind with their brilliance. While exploring her own special ability, forging new friendships and embarking on first love, Clio also stumbles onto information indicating that the military may not have been entirely forthcoming with them and that all may not be as it seems…
CONTEST:
Thanks to the author, I have a signed copy of Solid to giveaway to one lucky reader! It will also include a bookmark!
RULES:
Contest is open to the USA only!
No need to be a follower, but I would love it if you would!
Leave a comment with an email address for me to contact you if you win!
Contest will end 10/5/2010 with the winner being announced on 10/6/2010
Good Luck!