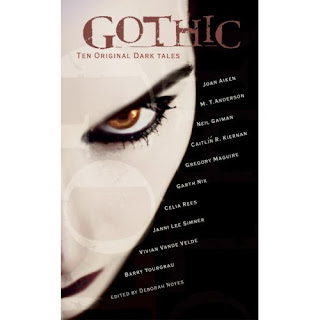 SYNOPSIS:
A lovesick count and the ghost of his brutalized servant . . . a serial killer who defies death . . . a house with a violent mind of its own and another that holds a grotesque secret within its peeling walls. Here are witches who feast on faces, changeling rites of passage, a venerable vampire contemplating his end, and a fanged brat who drains the patience of a bumbling teenage boy. Here too are a flamboyant young novelist in search of a subject more compelling than his own eerie existence and the daughter of a sorcerer fighting to free her lover — and her will — from sinister bonds. Enter the world of GOTHIC!, a celebration of the literary form made famous by such writers as Mary Shelley and Edgar Allan Poe. With chilling stories by: Joan Aiken M. T. Anderson Neil Gaiman Caitlín R. Kiernan Gregory Maguire Garth Nix Celia Rees Janni Lee Simner Vivian Vande Velde Barry Yourgrau

When I sat down to read this book, I thought this is going to be all about girls in black and deep depression. Boy was I wrong. These were quick reads that I could imagine repeating at campfires or at a slumber party. My favorite was the first story, but all of them gave you the creepy feelings. Overall it was not a bad book. Some of the stories I thought were dumb, but for the majority of them, it was a great fast read! Perfect for the slumber party for girls and boys!