It is my great pleasure to welcome author Shelly Laurenston to My Overstuffed Bookshelf today.  She is here to talk about “Writing the Flawed Heroine”.  Let’s give her a warm welcome and stay tuned for a contest at the end of the post!

I’ll admit it. I don’t like perfection. Or at least what I perceive to be perfection. And romances seem to have a lot of perfect heroines. They’re pretty but not too pretty. Thin but not too thin. Not too tall but not too short. Dainty hands, small feet, bright smiles, lush, thick hair. If the heroine does have a flaw it’s usually her inability to trust the hero…at least for the first three-quarters of the book. Then it’s all good.

So from when I first started writing, none of my heroines were perfect. Far from it. Most of them are riddled with flaws. They can be too loud, too pushy, extremely tall, extremely short, lots of scars or sometimes plain. Many of my heroines are only sorta human, it’s true. Wolf shifters, cat shifters, bears, dragons…these are my people. So to speak. But quite a few heroines I’ve written are all human and just as imperfect. I find imperfect just more fun to write.
And yet, I approached writing my latest heroine, Dee-Ann Smith with a bit of trepidation. And it isn’t because Dee-Ann is heavily flawed. She actually isn’t. Dee-Ann is what she is. A killer. Not a with-air-quotes “killer” that never gets around to killing anyone, but an actual, it’s-her-job killer. And she’s proud of what she does. She has no nightmares, no insecurity, no self-doubt. She’s an out-and-out predator and has no problems with that. When my editor talked to me about the cover for BIG BAD BEAST, I always had to remind her that the hero, for once, was not the beast in the story. I could tell my editor was nervous but she trusted me and I think it paid off.
In the end, what it comes down to for this character is that Dee-Ann of the Smith Pack is not your usual wolf shifter. Although she has a pack, she’s much more comfortable on her own, she ambles where she needs to go, and doesn’t let the little things bother her. But Dee can also be short of temper, long on grudge-holding, and persistent as a pit bull.
She’s tall, she’s powerful, she’s good with guns and knives. But she’s not chatty, not real affectionate, and if you’re annoying, she’s liable to tell you that in no uncertain terms. So writing Dee-Ann was definitely a challenge. How do you make a stone-cold killer with hard-set boundaries likeable? Well, first I had to like her myself. I only write heroines I like. Nothing is worse than spending several months with characters you hate. And I do like Dee-Ann. Then again, I really like predators. My old dog was a hardened predator. Nothing was safe in his world, other than me. He ruled with an iron paw but when it was just him and me in the house, he was the sweetest sociopath I’ve ever had the privilege of knowing. So when writing Dee-Ann I kept that in mind. I thought of her as wolf rather than human, which meant that those inside the pack are safe and loved, but those outside the pack…
And that’s how I approached Dee-Ann’s way of thinking. If you’re kin or friend or someone she’s been assigned to protect, she will risk absolutely everything, including her life. Dee doesn’t get bored, she doesn’t lose focus, she doesn’t lose interest. If she’s locked on you, she’s locked. And once I had that, once I had Dee-Ann’s core, the rest was relatively easy. And fun! Because when you like your characters, you enjoy writing the ins and outs of their lives.
There won’t be many heroines like Dee-Ann in my work, but I’m really glad I took the risk. Taking a chance—even with a heroine most psychiatrists would run screaming from—and having fun is what writing is all about.
———————————————————- 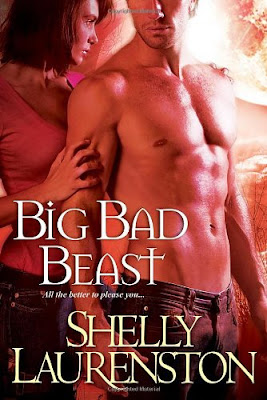 BIG BAD BEAST
Author: Shelly Laurenston
Release Date: April 26th 2011
SUMMARY:
When it comes to following her instincts, former Marine Dee-Ann Smith never holds back. And this deadly member of a shifter protection group will do anything to prove one of her own kind is having hybrids captured for dogfights. Trouble is, her too-cute rich-boy boss Ric Van Holtz insists on helping out. And his crazy-like-a-fox smarts and charming persistence are making it real hard for Dee to keep her heart safe…

Ric can’t believe his luck. He’s wanted this fiercely independent she-wolf from day one, but he never expected teamwork as explosive as this. And now is his last chance to show Dee what she needs isn’t some in-your-face Alpha male – but a wily, resourceful wolf who’ll always have her back in a fight…and between the sheets.
———————————————————-
Thanks to Kensington Books,  I have ONE copy of this book to give away!
CONTEST RULES: