Today on My Overstuffed Bookshelf, we have the wonderful author Lydia Dare here to share with us about her book A Certain Wolfish Charm. I have read and reviewed the book already found here, and it was a wonderful read by an amazing author! Let’s get started! 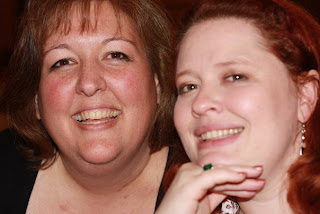 Welcome to Regency England – well, my Regency England which is inhabited by werewolves , witches and other creatures. Ahem, I should have said Lycans, not werewolves. Simon, the Duke of Blackmoor does get cranky when one uses the “w” word. It’s a bit derogatory, after all. And it’s best not to irritate His Grace.

Without further ado – I probably should introduce you to Simon, the hero of A Certain Wolfish Charm. He is the oldest of three Lycan brothers, the alpha of his pack, and the current Duke of Blackmoor. Rich and sexy, he spends most of his time in London enjoying the clubs, gaming hells and lightskirts.  Well, he does until the moon is nearly full. Then he retires to his family seat in Hampshire where he waits for the one night a month when he sprouts a tail, pointy ears, a snout, and can become one with nature.  His life is a routine controlled by the fullness of the moon.  Until one particular month when his routine goes awry by the sudden appearance of a woman,  one who just happens to  call more loudly to him than the moon ever has.
For years Simon has had his hands full, keeping his youngest brother, Benjamin, in check. Ben is kind and gregarious, but regrettably has found himself in more than one scrape of his own making. At the beginning of Tall, Dark and Wolfish (in stores May 2010), Ben has a problem and it’s not one he wants to discuss with either of his brothers. After an unfortunate incident, he is no longer able to transform under the power of the moon and he’s never been quite so frightened. After learning about a healing witch who lives north of the border in Scotland, Ben decides to seek out the old hag in hopes that she can return him to his former wolfish self. Little does he know that Scottish witches come in all shapes and sizes, even with fiery hair and curves any smart Lycan would want to take a bite out of.
William, the silver-tongued, middle brother is a rogue of the first order. He has an eye for the ladies and they have one for him. Will has been in love with the girl next door his whole life. But after losing her and realizing he couldn’t have her, he decided to have everything else in a skirt.  Or out of a skirt, as the case may be.  However when a wild Lycan tries to woo his lovely Prisca, Will instantly realizes that if any Lycan is going to have her, it will be him even if he has to move heaven and earth to win her back.  Will is forced to vow chastity in exchange for Prisca’s vow that she’ll take great care around the Lycan in gentleman’s clothes.  Only his vow of chastity does not pertain to her. She is fair game.  And one heck of a fun game it is, which you can read about in The Wolf Next Door (in stores June 2010)!.
Regency England has gone to the wolves. And I hope you enjoy the world I’ve created as much as I do.
A CERTAIN WOLFISH CHARM by LYDIA DARE—IN STORES APRIL 2010! 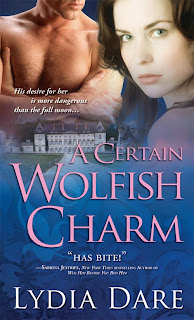 He gets crankier and crankier as the moon gets full…
The rules of society can be beastly—especially when you’re a werewolf and it’s that irritating time of the month. Simon Westfield, the Duke of Blackmoor, is rich, powerful, and sinfully handsome, and has spent his entire life creating scandal and mayhem. It doesn’t help his wolfish temper at all that Miss Lily Rutledge seems not the least bit afraid of him, and in fact, may be as untamable as he is…
A woman whose charm is stronger that the moon…
When Lily’s beloved nephew’s behavior becomes inexplicably wild, she turns to Simon, the boy’s cousin and guardian, for help. But Simon’s idea of assistance is far different than hers, and Lily finds herself ensconced in his house and engaged to the rogue.
They both may have bitten off more than they can chew when each begins to discover the other’s darkest secrets…
About the Author
Lydia Dare is the writing team of Tammy Falkner and Jodie Pearson. Both Tammy and Jodie are active members of the Heart of Carolina Romance Writers and live near Raleigh, North Carolina. They are working together on their next paranormal historical trilogy as Lydia Dare, which will be released by Sourcebooks Casablanca in Spring 2011! For more information, please visit http://www.lydiadare.com/.
GIVEAWAY:
Thanks to Sourcebooks, I have 2 copies of A Certain Wolfish Charm to giveaway! Yes, that means 2 winners! This contest will run until 4/25/2010 with the winner announced on 4/26/2010.
TO ENTER:
1.  You must live in the USA or Canada only.
2. No P.O. Boxes.
3. Be A follower of my blog.
4.  Just comment on this post with your name and email addy to enter!
GOOD LUCK!