Today on My Overstuffed Bookshelf I would like to introduce you to author Julia London. She is the author of the newly released book One Season of Sunshine. 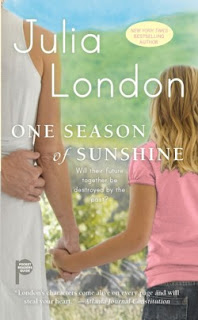 Thank you so much for having me here today.  I am thrilled to share ONE SEASON OF SUNSHINE with you and your followers.
People often ask me where I get my inspiration.  Probably some of it comes from educational TV.  Currently, my favorite show, WIPEOUT, which, on the surface may appear like a very juvenile show, but to the writer, it demonstrates that some humans are willing to try anything.  I like to think I take that notion into my writing—my characters should be willing to try anything.
I get inspiration from movies, too.  Sex and the City 2 taught me that there is a fine line between interesting sexuality in fiction and Samantha’s never-ending quest for meaningless sex.  I mean, ugh.  Seriously.
When I run in the mornings, I wear a little shuffle iPod full of inspiring songs…songs that inspire me to think about bad relationships that make people angry. I don’t know why, but it seems like most of the songs that have a beat I can run to are total downers.  Carrie Underwood wants to kick ass, Pearl Jam’s heart is always broken, and Nickleback doesn’t get along that well with women.  As a writer, I get the idea that if I want to sell books, I should really steer toward the more uplifting ending, or people will be running away from my books.
But I get my best inspiration from reading.  I read across a broad spectrum and I find that when I am reading, the really good ideas start to flow.  It is an organic process that I cannot explain.  I just know that words flow in and words flow out. The inspiration for ONE SEASON OF SUNSHINE came from an article about a woman who had come to Texas to just be here.  She had been given up for adoption at birth, and the only thing she knew was that she was from Texas.  I found it remarkable that a person would want to know her beginnings so badly that she would cling to something so vague.  The idea took root and grew from there.  It was definitely the words seeping into my brain that sparked the idea for the book.
I hope you will find the idea behind ONE SEASON OF SUNSHINE intriguing. I invite you to visit my website, http://www.julialondon.com, to read an excerpt, to see a video, and to learn more about me and more of my juvenile viewing habits.