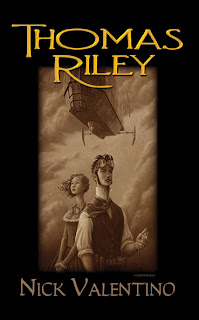 First off, a huge thank you to Amy for letting me come here and guest blog today. My name is Nick Valentino, and I’m currently on a blog tour in support of my first steampunk novel called Thomas Riley.

Some of you are probably thinking, “What the heck is steampunk?” Don’t worry you’re not alone. Steampunk is a relatively new genre that deals in alternative history. Oh! Hold on, keep reading. I know that seems a bit dry but here’s the twist. Steampunk is usually set in Victorian times but the world is very different. Huge leaps in technology have sparked a new scientific boom centered around, you guessed it, steam. Everything is powered by steam, science, alchemy and black powder. Forget the normal fossil fuels and electricity we’re used to, just about everything is steam. So in turn, there are massive dirigibles flying through the sky. Everyone wants to be a scientist, inventor or airship crewmember. But beware; where you have heavy air traffic you also have sky pirates, greedy privateers and a host of surly yet innovative Victorian characters. Here’s how I like to think of it, Chill 1 part Jules Verne, mix with two parts Indiana Jones, add a mixer of H.G. Wells and for flavor, add a twist of Frankenstein.

Thomas Riley is a steampunk adventure filled with airships, clockwork inventions and swashbuckling action a plenty. Here’s the back cover blurb.

For more than twenty years West Canvia and Lemuria have been at war. From the safety of his laboratory, weapons designer Thomas Riley has cleverly and proudly empowered the West Canvian forces. But when a risky alchemy experiment goes horribly wrong, Thomas and his wily assistant Cynthia Bassett are thrust onto the front lines of battle and forced into shaky alliances with murderous sky pirates in a deadly race to kidnap the only man who can undo the damage: the mad genius behind Lemuria’s cunning armaments.

Thank you for taking the time to read this.

Find out more at:

You can purchase signed copies at: