Today on My Overstuffed Bookshelf, I have the great pleasure of handing over the blog post to Parajunkee!  She was kind enough to give us her opinion on the thrilling genre of Urban Fantasy.  If you are a regular blog reader in the book review world, you know who Parajunkee is. Not only is she a great book review blogger, friend and person, but she also does blog design which is featured on many blogs out there! So be sure to stop by her blog as well!  So without further blubbering from me, I give you Parajunkee! 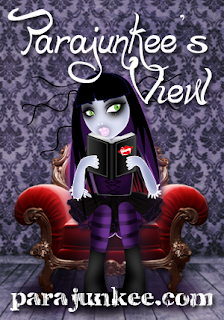 The Lure of Urban Fantasy
Now in the realm of genres I love, Urban Fantasy tends to take top rung. There is just something about the genre that gets my blood pumping. I tend to like anything that is a little off-the-wall, I say “toss it” to anything labeled contemporary or *gasp* non-fiction.  If it doesn’t have fangs, fur, or maybe scales, I’m not reading it. Set in the future? Some apocalypse action? Even better! There is a reason I read – and that is to step away from the ridiculous reality of the world around me. While my husband reads budgeting for dummies and my mom read WWII memoirs I look at them like they are insane. “Don’t you just every want to get away?”
In steps the Urban Fantasy. It is not mucked up with any particular romance that will get me thinking about how my husband doesn’t hold a candle to the hero (no guy on Earth usually does) and there is usually hardly any political statements or blustering by the author (really, I don’t care that you think the world will end because of subsea bacteria dying off from the oil drilling!). Urban Fantasy tales are just usually a gritty story about a world gone amuck with paranormals galore. Then the icing on the cake is usually the hero or heroine. Usually a heroine, because let’s face it, 90% of Urban Fantasy writers are female and you write what you know – female protagonist. Then these particular major players usually are the most kick-ass group of people you’ve ever met and if they don’t start that way they usually end up that way. I’m sold.
These main characters are usually the bread & butter of the novel. In one word they are EPIC. Who can deny the awesomeness that is Sookie Stackhouse, a waitress from a little nothing town in Northern Louisiana that can read minds? She sets out to meet a vampire and ends up saving one from two humans. Everyone thinks she’s crazy in the town – everyone except her new friends the vampires. Great series, great characters. Or characters like Mercedes Thompson, a female mechanic who can shape-shift into a coyote, she’s not as tough as the werewolves that she lives next door too but she sure keeps them in line. Then there is the crème de la crème. MacKayla Lane, whom I literally didn’t like in the beginning of the first book – but with her transition into kick-ass heroine she turned into one of the BEST Urban Fantasy characters of all time. Mac’s series, the Fever Series by Karen Marie Moning suck me in hook, line and sinker, much like the majority of Urban Fantasy series tend to do, if they are done right.
The great characters, paired with rich imaginative worlds and a boat load of otherworldly creatures takes me on a fun adventure that I just can’t pass up. If you haven’t had the pleasure of reading a good Urban Fantasy series, would you like some suggestions? I’ve got a bunch of them!
Topping my list would be the aforementioned, Fever Series by Karen Marie Moning. There are five in the series and they put me through an emotional roller-coaster in which I would throw books across the room. I might make the suggestion of purchasing all books in the series though, because she leaves you with some crazy cliff-hangers and you’ll want to pick up the next book the moment you finish one.
Another lovely series is the Rachel Morgan (The Hollows)  series by Kim Harrison. There are a ton of paranormals in this series that is still going strong after nine books (10th expected 2012). Want to go straight for the jugular with some vampire action? The Sookie Stackhouse series is overplayed by the HBO series but really one you don’t want to pass up. Funny, a little sick at times, with a good bit of romantic drama (but nothing that could be construed as a romance) and entanglements, the Sookie Stackhouse series should not be discounted.
Werewolves I mentioned the Mercy Thompson series earlier and it shouldn’t be forgotten. This is a great series that I don’t think get’s enough hype. Something you should definitely check-out. If you are not feeling the werewolves and want to get a bit winged, another of my ALL-TIME favorites, throw against the wall and send threatening tweets to the author is, the DARK SWAN series by Richelle Mead (you might know her from her Vampire Academy Young Adult series), it really must be something about faerie books. Drives me crazy sometimes.
Any of these series are a great place to start if you are thinking to expanding your horizons and Urban Fantasy is on that checklist. You can’t go wrong with this genre. It does tend to get a bit bloody, but if you are anything like me, you’re not having fun unless you get a little dirty.
XO Amy for letting me hijack your blog for a day! I hope I didn’t scare away any of your readers! If you are looking for even more suggestions I have a ton…