Today, I have author Carolyn Brown as a guest on the blog today! I also will be giving away 2 copies of her new book, Hell Yeah, to 2 lucky people who comment! Thanks to Sourcebooks for sponsoring the giveaway! Let’s welcome Carolyn to the blog!! 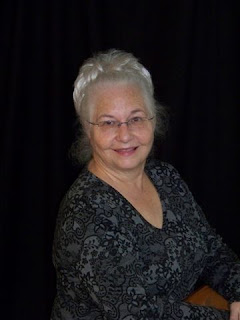 Good morning, everyone. It’s a delight to be here today to tell everyone about Hell, Yeah, my new book from Sourcebooks Casablanca that went on sale a couple of days ago. It’s the second book in the Honky Tonk series and would you look at that cover? Isn’t that Travis a sexy cowboy?
I’ve been asked how I research my country heroes like Travis for my books. It’s a very simple process actually. I interview them.
I already knew Cathy because she was Daisy’s cousin from I Love This Bar. She’d been taking care of the Honky Tonk while Daisy was off playing pretend wife to Jarod so Uncle Emmett wouldn’t stroke out. She and I’d gotten to be friends and I knew all about her past and her baggage. I also knew she was lonely at night after the bar shut down and that she had some hidden skills other than making margarita’s and drawing beer.
So I set out to help Cathy out, since she was my friend and all. First of all I sent Jezzy down to Palo Pinto County so she’d have a friend to talk to since Chigger, the almost-hooker from I Love This Bar, had gotten married and around as often.
But she was still lonely so I began the interviews. First of all he had to be easy on the eyes and make her hands itch to touch that big broad chest (check out the cover one more time) and then he had to be intelligent and as head strong as she was.
So I lined up a whole day’s worth of interviews and began. First cowboy who came in the door to my office didn’t take off his hat and still had cow manure on his boots. I didn’t mind the latter but a true cowboy removes his hat in the house and in the presence of a lady. Johnny hit the road with a look from me that would have knocked a full grown pit bull dog off a meat wagon. I think he scooted on back to the farm and forgot about talkin’ to Joanne Kennedy for a spot in her new book.
Next man that knocked on my office door was Pete. He was bald as cue ball, had a beer gut and hadn’t shaved in a week and he was wearing sandals, Bermuda shorts and a bright orange tank top. Now, I understand that all heroes do not have to be perfect and a few flaws are acceptable but really, I was looking for a cowboy not a bus driver for Jimmy Buffet. I asked him if he’d made a wrong turn out of Florida and what he was doing in my office. He swore if I’d use him that he’d learn to wear boots, ride horses and maybe he could learn to like steak. I threatened to sic the neighbor’s dog on him and Joanne threatened to shoot him if he came sniffin’ around her book.
They say the third is the charm and it was. When Travis brought me a dozen roses, a new Blake Shelton CD and said ‘Good mornin’, darlin’’ in a deep Texas drawl, I knew I’d found the perfect hero. He wore his jeans right. His boots were polished and his shirt starched and creased down the arms. He smelled like heaven and looked like sex on a stick. His hair was feathered back with just enough hanging on his collar to make Cathy want to touch it.
His eyes twinkled when I told him to sit down and we’d visit. He told me about his family just over the line in Arkansas and his views on women in general and that he’d love to go to Mingus to bring in a new oil well. During the interview I saw a little bit of sensitivity, a lot of stubborn pride and a real country cowboy’s heart hiding behind that plaid shirt. And I just knew that he and Cathy were going to fall in instant love. Sorry, Joanne, I could’ve sent him over your way but he was so perfect for Cathy.
So I put them in the Honky Tonk on New Year’s Eve without anyone else to kiss when the clock struck midnight and watched the fireworks begin. They sure didn’t do what I thought they’d do, though. They fought like two cats stuffed down in a pillow case and tossed over a clothes line and before the end of the book I wondered if I should’ve sent him on over to Joanne.
Pick up a copy of Hell, Yeah and read it to find out if my research paid off. Tell me how would you research a hero for a book if you were writing about cowboys? What would be the most important question you’d ask Travis before you put him in your book?
HELL, YEAH BY CAROLYN BROWN – IN STORES AUGUST 2010 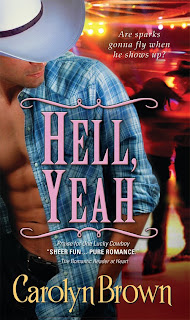 She’s finally found a place that feels like home…
When Cathy O’Dell buys the Honky Tonk, the nights of cowboys and country tunes come together to create the home she’s always wanted. Then in walks a ruggedly handsome oil man who tempts her to trade in the happiness she’s found at the Honky Tonk for a life on the road with him…
He lives the good life…
Gorgeous and rich, Travis Henry travels the country unearthing oil wells and then moving on. Then the beautiful blue-eyed new owner of the Honky Tonk beer joint becomes his best friend and so much more. When his job is done in Texas, how is he ever going to hit the road without her?
ABOUT THE AUTHOR
Carolyn Brown, an award-winning author who has published 36 romance novels for the library market, credits her eclectic family for her humor and writing ideas. She was born in Texas but grew up in southern Oklahoma where she and her husband, Charles, a retired English teacher, now make their home in the town of Davis, Oklahoma. They have three grown children and enough grandchildren to keep them young. http://carolynlbrown.com/

GIVEAWAY!!!
Thanks to Sourcebooks, I have 2 copies of Hell Yeah to giveaway!
Rules:
1.  Answer the question in red above from Carolyn!
2. Leave your name and email for me to contact you if you win!
3. Open to USA and Canada only.
4. No P.O. Boxes please.
Contest ends: August 8th, 2010