Sunday, I reviewed Seduced by the Wolf by author Terry Spear. I loved the book! I am so excited to share with you a guest post from a lovely and very talented author, Terry Spear!  Sit back, enjoy your beverage, chat and enter the contest! 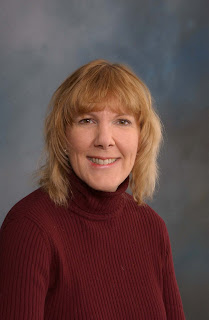 First, thanks so much, Amy, for having me here on your blog today!!
Character Cooperation? That is an Oxymoron!
When I begin a story, I don’t know who the characters really are. As the story develops, I learn more and more about them—their flaws, their secrets, their deeper desires.
If you don’t really know the characters all that well to begin with, how can you expect them to always cooperate when you’re trying to write their story? That’s the difficulty I often run into.
When I began writing Heart of the Wolf, I had no idea Bella Wilder was going to end up in the zoo. What a fiasco. Do you know how hard it is to get a character out of a tight spot like that? Here she is facing a big lusty wolf, that’s interested in making her his mate. Except he’s all wolf. And that’s only the proverbial tip of the iceberg.
Then in Destiny of the Wolf a group of teen werewolves get themselves in a real bind, hanging from a cliff in a snowstorm. And Lelandi Wildehaven realizes as she’s on her way to rescue them, she’s being stalked. But I had no clue she was going to take off with Darien Silver’s truck in the first place, which gets her into all the trouble.
Now it’s not just the heroines who cause lots of problem. We won’t mention Hunter Greymere’s sister in To Tempt the Wolf as he is shoved from a cliff and then rescued by Tessa Anderson. Now, being a pack leader and an alpha male, I never expected to find his pack mutinying him, his sister running off, nor the trouble he gets into when he becomes entangled with Tessa and her problems.
In Legend of the white Wolf, Cameron MacPherson and Faith O’Mallery meet and soon learn that not all Arctic wolves are the same.  How was I to know they’d keep running into dead bodies? And end up sharing a cozy cabin for two in a snowstorm?

Now Leidolf Wildehaven, well, I’d gotten to know him well in the first four books, right? Well, yes, except that men and women act differently around the opposite sex, you know. So in Seduced by the Wolf, I had no idea how he would react when he first meets a wolf biologist who intrigues him for her love of wolves. And it didn’t even matter that she wasn’t a werewolf! Although she is. But he doesn’t know that. At first. Once he learns she is, he discovers just how hard changing her mind about werewolf packs is going to be. I knew he could be persistent, but he goes way beyond that to try to convince her he’s the one for her.
In Wolf Fever (to be released in December 2010), I never realized how hard being a psychic werewolf could be. Not only does Carol Wood have the problem with controlling her psychic visions, but the urge to shapeshift is wreaking havoc with her need to control some aspect of her life. Then here comes Chester Ryan McKinley who creates all kinds more trouble for her—especially the way he grills her about truly having psychic visions and her insistence that he is much more intrigued with her than he wishes to let on. I don’t know where all that was coming from, but she sure had him pegged.
In Heart of the Highland Wolf (to be released in Spring 2011), it turns out Julia Wildthorn, werewolf romance author, has a family secret and is trying to discover what it truly is, along with getting some story background for her first historical Highland romance—werewolf style. Now I had no idea about this secret, and I’m sort of miffed that she didn’t let either her good friend in on it, or me either, because after all, how could I tell her story if she’s going to hide half of it from me?
And in Dreaming of the Wolf (to be released Fall 2011), well, Jake Silver is pretty easy to understand. He’s an alpha male, sub-leader to his triplet brother from Destiny of the Wolf, Darien Silver, and he loves to photograph Colorado wildflowers. Now, what I didn’t know was how much he would be intrigued with a human woman who’s a little out of her league as she tries to serve warrants as a bounty hunter. She’s really gotten herself into a mess what with trying to hide wolf secrets while telling as much as she can to the local police during shootings and the like…but every time she goes anywhere, she gets herself into more trouble. And I’m really having a difficult time getting her out of it. But Jake is sticking by her side no matter what. It’s bound to get a whole lot worse before it gets better—if ever!
So what is a writer to do? Go with the flow. Life is too short to fret and stress about it. Everything will work out in the end. That’s my motto. And yes, I do have to put on some brakes sometimes, and just say, “Woa! Wait a minute.” It doesn’t mean they will listen to me! But in the end, it’s really their story! So what do I know?
Thanks so very much for having me here today. I have to tell you the blog you proposed was a lot of fun!!! Thanks again, Amy!!! And thanks to everyone who drops by and says hi!
My question is:  What do you think of all these characters? Should they listen to me? Or should I listen to them? Or in the end, does it really matter as long as you have a Happily Ever After???
Terry
Thank you so much for stopping by Terry! I love all of your characters! We all love a happy ending! What I wouldn’t give for a complete signed set of these books! *sigh* Even if it is just to look at the covers! 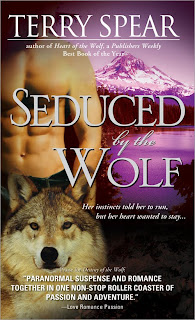 GIVEAWAY!
Thanks to Sourcebooks, I have 2 copies of Seduced by the Wolf to giveaway!
Rules:
1.  Answer the question in red above from Terry!
2. Leave your name and email for me to contact you if you win!
3. Open to USA and Canada only.
4. No P.O. Boxes please.