Today on My Overstuffed Bookshelf, I would love to introduce you to the fabulous author Paige Harbison. Paige is the author of Here Lies Bridget, which was a great book, and you can read my review HERE.  Paige is here to describe her high school experience and the development of her main character of the book, Bridget. 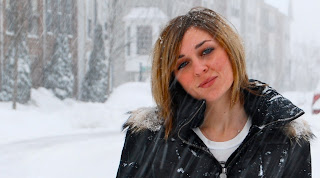 High school is the no man’s land between your comfortable trenches in childhood and the other side that holds all of the unknown. You plod upon the landmines with careful but heavy feet, and they explode. One shrieks like a dog toy, “Slut!” Another, “Ugly!” And in a lower, male voice, “What a bitch!” I had that experience in high school, and many of you may have too. My character Bridget takes part of that experience to a whole new extreme.

Everyone in high school is suffering from high emotions ruled by hormones (sorry to sound like Mom, but it’s just so true), so most people are ready to freak out in one way or another. Girls who find themselves at the top feel like they’re suddenly balancing on stilts, and they know that anyone can knock them over if they really try. So they start landing their sharp little stilts right on your toes. The guys are struggling with the attempt to become men, and so they try to assert themselves by being ultimately as mean and catty as the girls. Self-defense comes off as incredibly offensive.

Now, that’s not everyone, but that’s usually the worst of it. High school is one place where you find out how awful people can really be, and where you hopefully realize at least who you don’t want to be.

When I was in high school, I was a “floater.” I went to four schools, due to a couple of random moves that happened between ages 14 and 16 (there’s a book full of stories there, believe me). Everyone is pretty much the same. I was never tortured or bullied—or maybe I was but never noticed, because, really, screw that—but what I found was that everywhere, there was not so much an ‘in crowd’ so much as A-listers. These were the people and names that everyone knew. It wasn’t one group of super skinny girls and concussed football-playing boyfriends. It was anyone who everyone found worth talking about. I found myself on that list often because I was so often new. The new girl who doesn’t act like a bitch and has big boobs is bound to find herself on that list—it was barely personal, and not always flattering.

Bridget, who was popular with boys and a little snide toward teachers (okay, a lot snide, but I was nicer than she was) and had some girlfriends by her side, is dramatized for fiction, but has some traits that may be typical of how many popular girls feel. She’s driven by insecurities, and unfortunately she chooses to knock down those who threaten her in any way. She doesn’t even think twice about the offhand remarks she makes to the people she does care about, subconsciously thinking that her actions could never really affect someone else all that much.

I never ‘ruled the school,’ but neither did anyone else at any of the schools I went to. All the girls who were the prettiest and most popular were also called sluts and bitches more often than not. “Slut” was such a falsity, but also the thing I heard the most. I was, I guess, flirtatious, but I was not a slut. But it was an easy thing to call me.

Everyone can walk out of high school for the last time remembering stupid things someone called them, or embarrassed them with. No one is immune. I was in the car the other day with three guys, who despite their good looks and sparkling personalities, have plenty of embarrassing and awful stories from high school. We were laughing and looking back on the things we were so asininely called in our childhoods and into high school, insults that felt like red-hot cast-iron on our flesh back then, seemingly damning us to a lifetime of being ‘the girl who is way too tall’ (5’3 in 8th grade…really not that big a deal…) and ‘the guy who tripped once’ or ‘the guy who called his first grade teacher ‘mom’ once.’ These things now seem laughably insignificant.

There were probably worse things we were all called that either no one wanted to say aloud or have been long since forgotten, as we all wrap up our senior year in college. But the point is that they don’t hurt or even make us cringe anymore. Once you aren’t trapped like a rat in a cage with everyone you know, those hurtful words and actions cease to be the painful things they are now. I think I was lucky enough to get perspective on this early, because I went to so many different schools and saw that there are jerks everywhere and that they barely differ from school to school. Anything that ever ‘ruined my life’ five years ago has only turned into material for stories at parties.  The lines immediately blurred after high school, and what we were back then to our peers (nerd, slut, popular, etc.) are all distant memories. Now it’s as defining as whether or not you’ve ever broken a bone. It happened. It hurt or it didn’t. But it’s all fine now.

You always hear from parents that “you won’t care about these people in a few years!” or “she’ll get hers.”

But I’m not a mom with a kid she needs to comfort. I’m 21 years old, and I still come upon mean girls and catty bitch-boys. And the only thing I can say is that it so stops mattering. It really does. The Bridgets in the world might not have fate walk into their lives and say, “What the hell is wrong with you” but believe me—someone will. And whoever she is, whether she’s a pretty girl with a perfect life, or a meathead football player, or that weird guy who no one really knows but he’s just mean to everyone, any Bridget will get hers. And by the time she does, you’ll barely care. 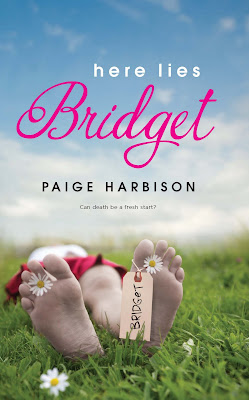 HERE LIES BRIDGET
Bridget Duke is the uncontested ruler of her school. The meanest girl with the biggest secret insecurities. And when new girl Anna Judge arrives, things start to fall apart for Bridget: friends don’t worship as attentively, teachers don’t fall for her wide-eyed “who me?” look, expulsion looms ahead and the one boy she’s always loved—Liam Ward—can barely even look at her anymore.

When a desperate Bridget drives too fast and crashes her car, she ends up in limbo, facing everyone she’s wronged and walking a few uncomfortable miles in their shoes. Now she has only one chance to make a last impression. Though she might end up dead, she has one last shot at redemption and the chance to right the wrongs she’s inflicted on the people who mean the most to her.

And Bridget’s about to learn that, sometimes, saying you’re sorry just isn’t enough….