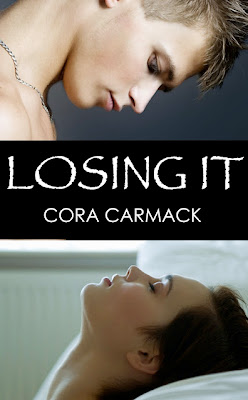 Virginity.
Bliss Edwards is about to graduate from college and still has hers. Sick of being the only virgin among her friends, she decides the best way to deal with the problem is to lose it as quickly and simply as possible– a one-night stand. But her plan turns out to be anything but simple when she freaks out and leaves her potential sexual partner alone and naked in her bed with an excuse that no one with half-a-brain would ever believe. And as if if that weren’t embarrassing enough, when she arrives for her first class of her last college semester, she recognizes her new theatre professor. She’d left him naked in her bed about 8 hours earlier.

Hi! Thank you so much for having me here at My Overstuffed Bookshelf! I LOVE this blog (especially the martini glass rating system). My kind of place. J
I did a lot of thinking about what I wanted this guest post to be about, and in the end I decided to talk about perfection.
I feel like I see a lot of talk about “the perfect guy,” especially with reference to some of our favorite book boyfriends. Bloggers dedicate memes and posts and even tournaments to these fictional hotties.
And none of us are complaining because, hello, we’re all in love, too!
And let me tell you, if a man like my lead male Garrick walked through my door, I would never let him out.
I could probably talk forever about my book crushes, and I do whenever I’m out with book friends. J
But today I’d like to talk about what makes the perfect couple. Sometimes those hot fictional boys we love so much steal the show, and we forget entirely about the heroine and how the two stack up as a couple.
When I was writing LOSING IT, there was a moment after I finished the first chapter, where I almost decided to do the book in a split narrative, alternating chapters from Bliss and Garrick’s point-of-view. Ultimately, I decided not to do that (though the epilogue is in Garrick’s point-of-view). Some of you are probably disappointed by this news, but Garrick was such a strong, swoon-worthy character, that I didn’t think we needed his perspective to love him. It was really important to me that Bliss be a strong, well-rounded character that didn’t get lost behind our love for a guy.
And I hope I’ve made their relationship the focus, instead of just Garrick’s hotness.
So what makes a perfect couple?
Well, I think it’s similar to what makes a good couple in real life. In a good relationship, neither person loses him or herself to the other. They don’t become less in any way to please or appease the other. In fact, I think in a strong relationship, each person becomes more, becomes stronger because the other person is a part of their life.
Bliss, for example, has a tendency to stress and become paranoid. Calmness flies out the window, and she loses her head. Garrick grounds her (well, eventually, after he’s through flustering her). By the end of the book, he’s not taken away her quirkiness or her awkwardness, but I think he’s helped stabilize her life. On the flip side, Garrick can take things too seriously. He can be too blunt, too ruled by his emotions. He likes Bliss because she’s the opposite in many ways. She balances him out, makes him take life a little less seriously.
The ”Perfect Couple” doesn’t necessarily behave perfectly, and they certainly aren’t perfect in and of themselves. The perfect couple is one where you can see each other at your worst—whether it is in a mortifying situation (CATS!) or an unattractive one (sick in bed)—and love each other more for it.
I don’t know that I’ve managed to create “the perfect couple” in LOSING IT, but I’ve tried. There are a lot of books out there that I really love, but when I finished them, I was left with kind of an icky feeling because the relationship in the book felt too one-sided. The girl gave up too much of herself to the guy or vice versa. It didn’t keep me from liking the book, but if something similar happened to me in real life, I would walk away from a relationship like that without batting an eye.
In LOSING IT, I just wanted something good. Something honest. I wanted the kind of thing we all look for in real life.
Thanks again for having me! It’s been such a pleasure!
In Awkward
Cora
ABOUT THE AUTHOR
I’m Cora Carmack,  a twenty-something writer who likes to write about twenty-something characters. I’ve done a multitude of things in my life– boring jobs (like working at Target), Fun jobs (like working in a theatre), stressful jobs (like teaching), and dream jobs (like writing). I enjoy placing my characters in the most awkward situations possible, and then trying to help them get a boyfriend out of it. Awkward people need love, too.  My first book, LOSING IT is available as an ebook on Amazon and Barnes and Noble.