Today I would like to welcome author Jeffrey Bryan as a guest post today.  He is the author of Silent Desperation.  You can find the review I posted of his book here.  Welcome Jeff and I will hand it over to you now!
How the idea came about for the book
The mix of stories and poetry in “Silent Desperation” reflect pieces created over a 15 year period.  So while none of them was written to be part of a book like this, a friend suggested that putting together a collection of my favorites might be fun for my readers.  So I set out to select stories and poems that had a common feel or theme.  Oddly, the hardest part of the exercise was choosing the title for the collection.  Originally I had wanted to title the collection for the story “The Forever Man”, but my editor insisted that the title should be that of “Silent Desperation”, as, in their opinion, that was the most powerful piece in the mix. So in the end, and as usual, I did as the Editor suggested.
The process of writing (for me anyway)
As I imagine is true for most authors of fiction, over the years I’ve enjoyed reading for pleasure for years. Recently I’ve been exploring epic stories that range between science fiction and more contemporary fiction, and I had been trying my hand at capturing some of my own ideas during that time.
In essence, many of the poems were written as a sort of conceptual shorthand – capturing an idea/emotion/impact that I wanted to convey in a longer story. In many cases, I never stopped with the poem, but just moved right on into the story. Most of the stories in “Silent Desperation” are of that variety. The poems included after the stories are mostly topics that I expect to write short stories or novels around in the future. 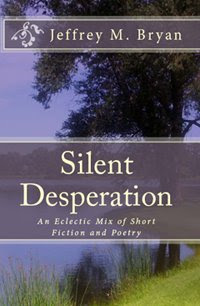 The key to writing for me is the tale – the actual story that I’m trying to express. The primary tool, of course, for doing this is outlining. If I didn’t outline my stories first I’m certain I’d wander off away from the point of the story and get lost. And if I get lost as the writer, it’s certain that I’d lose the reader as well.
It’s often starling to me in retrospect to realize where (and when) the ideas for the stories dawned on me.  Sometimes it’s funny, sometimes it’s poignant, but it’s always like a lightning bolt – a bolt of inspiration or insight that has me running for a computer or scrambling for a pen to write down enough of the idea to ensure I can flesh it out in time.
As examples, “One Dark Night” was a story inspired by actual events, “The Forever Man” was the result of a lonely isolated evening of introspection, and one story was the literal chronicling of a dream… or was it a dream?  I still don’t know.
What’s next?
I have several novels in the works, including the novelization of the story “Eyes of Echo” in my recently released book. The next work I expect to complete is almost half written now and it’s the story of an unusual birth of an unusual creature under unusual circumstances. So you probably get the point that it’s a rather unusual story. 🙂
I don’t want to give too much away, but the title of the work is “The Gilead” and the teaser is:
Born in blood, raised in darkness, the creature known as Gilead has a purpose – a purpose he never expected to share, even with those whose trust he has gained.
The story starts with a mute and very pregnant woman brought to an inner city emergency room late at night. In severe distress, her baby is born through the efforts of a dedicated young emergency room doctor and her more experienced nurse, Nancy. A dreadfully difficult birth, the mother is unable to be saved, yet her child survives. The creature born looks nothing like a normal human baby, however.
Taken to safety by Nancy, the creature named Gilead grows quickly, learning far more rapidly than any normal human baby could. In the process, Gilead begins to teach Nancy things that she finds hard to believe, things that are beyond her understanding of normal human capabilities.
Resigned to a role as student to Gilead’s teachings, she discovers that he has a driving purpose that he cannot or will not share. Compelled to travel west from his initial birthplace in search of answers to this purpose, Gilead discovers that he has begun to learn from Nancy what it is to be human, even as he teaches her what it could be to be a human.
That sets up the first part of the book, and I hope to have it ready to send to a publisher (no idea who yet) by the end of the year.