Erotic romance is a description in the round—in 3D if you will – of a love affair. My heroes and heroines are healthy, relatively young people who are strongly attracted to each other, so sex is definitely part of the mix. The sexual tension is always high and the actual love scenes are very specific to each couple. The sex is not always perfect—it rarely is in real life, either. But there is no denying the strong underlying desire felt by the couple. And that desire has to be described. At least I think it has to be described in a modern novel, particularly a romance.

Think of it like this—when you watch old movies don’t you sometimes laugh at the dramatic moments that are often badly rendered? The man shot to death who lurches about in a dramatic fashion and falls down dead without a drop of blood? The action scenes where it is clear that the whole scene is shot in front of a painted backdrop? Then couple kisses and it fades to black?

Modern movies are very realistic to look at. They use CGI and visual effects but it doesn’t matter. By God you feel like you are right there, facing death, on the top of the cliff, falling in that airplane. A good modern novel is like that—it depicts the story in the most realistic fashion possible and to me, that means that there should be sex in a romance. It is an indispensible part of the process of falling in love.

I’m not wildly keen on the farther shores of sexual experimentation such as BDSM, because I wouldn’t like it in real life. Try to get near me with handcuffs and I will put a knife through your heart. Spank me and I will break your arm. That whole scene does not attract me in any way, shape or form. Pain is not pleasure, not in my world. Nor am I attracted to ménage—more than one partner at the same time. I wouldn’t want to live it, I don’t want to read about it, I don’t want to write about it.  The eroticism in my books comes straight from the intensity of the feelings the protagonists have for each other. Without that intensity, without their very special and unique chemistry, it wouldn’t be sexy at all.

I know it’s fashionable to criticize 50 Shades but actually I liked the trilogy. I read all three fast, straight through. It’s eminently readable, and a real love story. The bondage there was a trick—Christian isn’t by nature a sadist. Once he falls in love all that whipping nonsense stops. If you can get past The Red Room of Pain, the books are actually kind of sweet. The books have sold something like 50 million copies worldwide.
It just goes to show what a big market there is for red-blooded romances with a high intensity of emotion and a full description of the sex between the lovers. 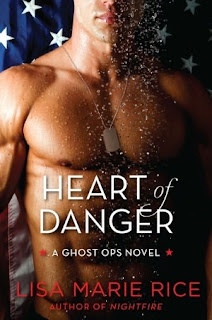 Ghost Ops. A small unit of super-elite soldiers so secret only two men know of their existence. Betrayed by their commanding officer while on an antiterrorist mission, the team is massacred. Only three survive—and find themselves framed and disgraced. But en route to the court martial, they escape . . . and disappear.

Beautiful, brilliant, and determined, Dr. Catherine Young is on a mission to find a man who has vanished into thin air. Walking into a high-tech hideaway bearing an essential message to Tom “Mac” McEnroe, Team Leader of the betrayed Ghost Ops force, is the most dangerous thing she has ever done. The soldier she encounters is frightening and suspicious, but her senses reveal the man underneath: tough, honorable, and so breathtakingly masculine Catherine feels weak in his presence . . . But to surrender to Mac’s passionate desires would put her life in dire jeopardy. Catherine has a gift that enables her to see into the heart of others—and looking into Mac’s is like staring into the very heart of danger itself.

BOOK ON GOODREADS
BUY FROM AMAZON